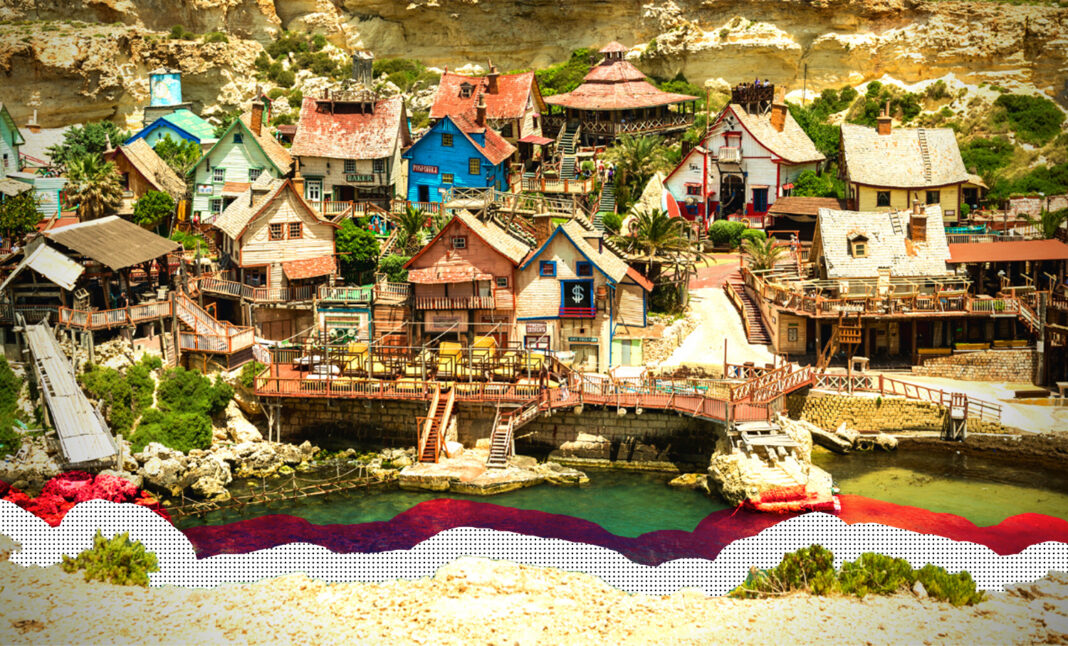 When I traveled across to Malta in September 2021, little did I imagine Louise, the receptionist at my hotel, telling me to, “Visit Popeye Village.” I had to ask her what Popeye Village was. She handed me a brochure, and I couldn’t believe it. She said, “Popeye was filmed in Malta.” I had no idea!

The 1980 live-action musical version of Popeye hit our screens. The movie was the first big-screen role for Robin Williams. But the film failed to take off at the box office, as it made $60 million from a budget of $20 million. Critics could not have imagined that more than 40 years on, people would still be talking about the film. That’s because if you find yourself in Malta, it’s impossible to visit the country without somebody mentioning everyone’s favorite spinach-loving sailor. The film set has become a big tourist attraction that you cannot leave the country without visiting.

Malta’s Anchor Bay, not too far from the village of Mellieħa, was converted into Sweethaven, the fictional coastal setting Popeye lived in for the movie. It’s not unusual for large sets such as this to be constructed for a film, but rare for the production crew to leave without taking their work home with them.

Before filming took place back in 1979, Paramount Pictures had an agreement with the Malta government that the set would remain in place after the production. Speaking to Popeye himself (one of the actors who is now dressed up playing the character in the village) told me, “The set was agreed to be left alone for possible future films. But when the film didn’t do too well, the production crew never came back. Which meant the set was left here to rot.”

He went on to tell me, “For years, whilst it was derelict, people would come in and take props and parts of the set as souvenirs. When you think about it now, it’s unbelievable how it was just left. The authorities in charge decided to transform the set. Here we are today, a big part of Malta’s landmark.”

Once you get there, there is an entrance fee. The time I went, it was $20. When I entered and saw the buildings from afar for the first time, it was a surreal moment. Instantly, I felt the presence of being on a movie set. I couldn’t believe the film was produced here. As I walked down, there was a carnival atmosphere.

When you buy your entrance ticket, the ticket gets you a free postcard from the post office and popcorn from the cinema. The cinema is at the heart of Popeye Village, which plays clips from the movie and behind-the-scenes footage. There is also another building where you can go in and watch the entire film.

The restaurant and bar are situated where the famous fight scene with Popeye was in the film. There was another cafe, but they decided to close it for now due to covid. This is likely to reopen soon. They also have a play area for kids, which includes a mini-golf course.

There are sunbathing chairs for people who want to relax by the Mediterranean sea, or you can go swimming with some inflatables in their water park feature. Weather permitting, you can also catch a boat trip around Anchor Bay to get an entirely diverse perspective on the village.

As I mentioned, I spoke to one of the actors who played Popeye. There were other actors dressed as characters from the movie, including Olive Oyl, Popeye’s love interest, just wandering around the attraction, which made it feel even more surreal. They were so friendly as well.

Popeye Village has also become a popular venue in Malta for corporate events and private parties. Popeye once again told me, “It gets decorated during Easter, Halloween, and Christmas. School kids will have the whole place for the day to enjoy. Many people decide to have their wedding here as well. Perfect if your wedding is themed around spinach!”

What are my thoughts on Popeye Village? I must say it’s such a unique place for film fans to visit. I can’t think of many purpose-built movie sets that you can see anywhere in the world, let alone finding one as well-preserved as Sweethaven.

Malta itself has since become a popular film location but you’d be hardpressed to find a movie that has left a more lasting legacy on the country. In fact, it’s hard to imagine any other blockbuster leaving such an intriguing legacy like this anywhere in the world, which is why it’s such an attraction. You simply cannot travel to Malta without visiting Popeye Village.