Home » Where to Eat, Play, and Go in San Sebastián, Spain 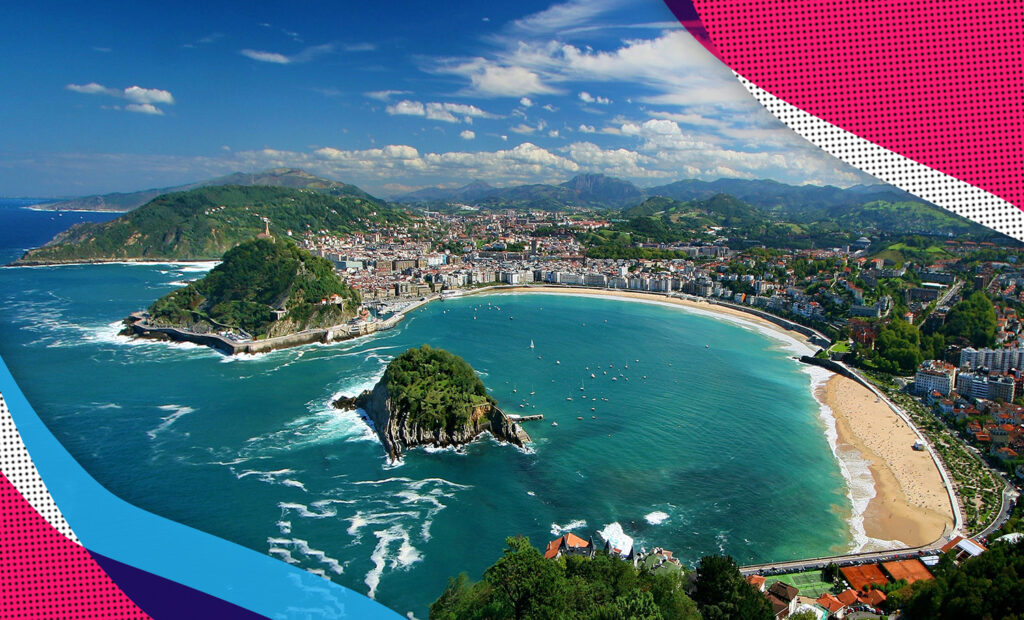 Food, art, and sightseeing; just the way I like it! That’s what I will say reverberates with San Sebastián, Spain.

The city, also known as Donostia to the local Basque people, sits on the north coast of Spain. It’s celebrated for its cuisine and is home to countless Michelin-starred restaurants, pintxo (tapas) bars, food markets, and gourmet food shops. That’s not all that needs to be celebrated about the city. San Sebastián has some incredible museums and art galleries that commemorate the city’s local and renowned artists.

As my major was in Fine Art, visiting a museum or an art gallery is usually high on my list wherever I travel. Especially the thought of being able to observe a local artist’s work. In this instance, Eduardo Chillida and Cristina Iglesias in San Sebastián. When it comes to cuisine, I can have an entire itinerary planned so that I can eat all day. Which I’m sure is the case for so many of us.

So, where are the best museums and galleries to visit during your stay? And I am sure you are itching to find out where to eat and drink. Here is what you need to know before traveling to beautiful San Sebastián in the coming weeks.

Museums are part of the culture

Chillida Leku is a unique museum that Eduardo Chillida, a Spanish Basque sculptor notable for his monumental abstract works, founded during his lifetime.

The museum comprises the artist’s most comprehensive body of work and is located on the outskirts of Hernani near San Sebastián and incorporates a sculpture park and an exhibition space inside the converted Caserio Zabalaga, a traditional Basque Country house dating from the sixteenth century. I had the luxury of being shown around by the late artist’s grandson, Mikel Chillida.

What makes the museum unique, then? I put this question to Mikel Chillida, and his response was, “Chillida Leku is a museum that is not a museum; it is a ‘place’. My grandfather worked on the concept of place, always related to the human scale and its relationship with nature, and this is something that can be appreciated here.

We must also bear in mind that this museum has been created by the artist himself, a very personal work carried out during the last 20 years of the artist’s life. We have been hosting temporary exhibitions of artists with whom my grandfather had some connection, as is the current case with the Joan Miró exhibition, which allows us to contextualize Eduardo’s work.”

Whilst there, I felt a sense of history and a natural feel of what the artist set out to do in his career. Why is it essential for Mikel Chillida to carry the weight of his grandfather’s legacy on his shoulders after his passing, not just with Chillida Leku but with work scattered worldwide?

“I think it is this human factor that makes the difference and makes us so attached to keeping the legacy alive. Eduardo Chillida’s legacy represents an absolutely honest and human way of working. And at the same time, natural. The respect for the materials, the environment where the work is located, and the nature that makes the work alive. I think these are more relevant issues than ever. His defense of human rights, of concepts such as tolerance and peace. His work has many values imbued, and humanity has a lot to gain from his work.”

Eduardo Chillida also has work currently exhibited at San Telmo Museo, a 16th Century convent with a modern architectural extension located right in the centre of San Sebastián. The museum, which is 120 years old, is holding the first exhibition with Eduardo Chillida & Jorge Oteiza together.

Oteiza was a Basque Spanish sculptor, painter, designer, and writer from the Basque Autonomous Community, renowned for being one of the leading theorists of modern Basque art. Although they had their differences later in life, they were friends and followed and respected each other’s work. At the same time, they kept on creating and exploring new ways and achieved international recognition.

As both are vital artists in the history and development of Basque Art, and both are somehow references for new creators, the museum is proud to be the first place in the Basque Country to present them together.

The exhibition in San Telmo has already received nearly 30,000 visitors and will probably be one of the most successful since the museum reopened in 2011 after its renovation. Visitors will find works that show the development of their creativity, the results both made for the Sanctuary of Arantzazu, and the possibility to see different versions of the famous Comb of the wind by Chillida.

Mikel Chillida told me about the delight of the exhibit going ahead. “My opinion could not be more positive. There is always a space/time for peace, this is what Eduardo and Jorge said in life, and I believe that what they started to solve has now been completed. They are two exceptional artists, and it is time for those of us who represent them to do our job of looking forward. The exhibition is wonderful, and there is nothing better than to let the works of both artists speak.”

These are significant reasons for visiting both museums during your stay in San Sebastián. Plenty of other work will be exhibited throughout the year, but this exhibition in San Telmo finishes on the 2nd of October 2022. It is open Tuesdays to Sundays, 10-8 pm. Chillida Leku is open every day apart from Tuesdays and Sundays, between 10-7 pm. There are small entrance fees to pay on arrival.

San Sebastián is a small city; you can walk around and enjoy a great ambiance. One of my suggestions is to head to the island, San Clara. You can book a boat from the terminal; it only takes about 10 minutes to cross over to the island.

The island is a remote public space. Remote because sometimes it’s impossible to travel across due to the weather or sea conditions. Once there, it has a beautiful view of the city of San Sebastián. There is a Kontxa sidewalk and all the bay, a place where locals and visitors enjoy swimming, kayaking, walking, and playing sports.

Nestled on the island lies a disused lighthouse that now holds an incredible new sculpture by Spanish artist Cristina Iglesias. Iglesias’s site-specific pieces meditate on the connection between humans and the natural environment. The Madrid-based sculptor has unearthed the floor of the hollowed-out lighthouse to assemble a cascading bronze sculpture that looks like it’s part of the rocky island landscape.

The artwork is titled ‘Hondalea,’ reminding us of the need to protect the seas and the environment. Iglesias says her sculpture “Evokes the idea of art as a refuge.” The best time to visit would be summer. The lighthouse is open after Easter until October. The experience could be totally different depending on the weather.

With boats running between the coast and the island throughout the summer months, those who make the trip out to the lighthouse can cast aside all their mundane problems and, quite literally, stare into the abyss instead.

As I’ve already mentioned, San Sebastián is eminent for its cuisine. It certainly lived up to its expectations during my visit. Ask any Spaniard where the best food in Spain is, and they will undoubtedly answer the Pais Vasco (Basque Country), with San Sebastián being its culinary centre.

A couple of pintxo bars I tried which I highly recommend, would be Borda Berri and Bare~Bare. Borda Berri had the most exquisite fresh tuna, which was the fish of the day.

Ana Intxausti Gardeki, who does food tours, took me around these bars and told me, “There is no better place to try the food. There are plenty of bars and restaurants. Sometimes you go to one because there are few people there at the time, sometimes to another. After all, you feel like eating a prawn and know you will find a good one there.”

Most of the museums have spectacular cafes and restaurants. Chillida Leku’s cafe offered exceptional coffee, food, and wine. I got to taste what was on offer, and I can’t think of a museum that offered such a high standard of food & drink. It gave me a homey feel, which was a significant factor during my visit to the museum.

Mikel Chillida reiterated why San Sebastián is a food place and, in particular, why the museum has high standards. “The Basque Country is a place where gastronomy is very important, it is almost a cultural issue, and so we decided to look for a partner who would work in accordance with the value expectations that Eduardo Chillida himself had regarding his work.

Our gastronomic offer is the same, local and seasonal produce but with styles of preparation open to international trends. In this sense, Feche Pachá, our chef, has proposals deeply rooted in our culture, and the very name of the coffee “Lurra” (earth, in Basque) refers to the territory and the works that Eduardo Chillida made with chamotte earth.”

There are plenty of other restaurants and cafes, and to be honest, you won’t be disappointed wherever you go. I do not doubt that you’ll be well on your way to becoming a San Sebastián food expert once you have devoured the food the city offers.

Before leaving the north of Spain, I would recommend one bonus: I flew into Bilbao, the biggest city near San Sebastián, which is an hour away by drive, to try and catch the exhibit SCIENTIA, where there is a monumental sculpture by the artist Grimanesa Amorós, a Peruvian-American artist known for large-scale light sculpture installations.

The exhibit is available until the 31st of August. It’s held at the Azkuna Zentroa Centre for Society and Contemporary Culture Bilbao’s Atrium. The sculpture’s importance of light is to improve people’s mood and mental health. The Peruvian creator presents this installation to promote moments of self-reflection and personal realization.

Is San Sebastian worth visiting?

YES, and you’ll need several days; I suggest four days to get a feel and understanding of what San Sebastián offers. It features an incredibly unique culture and the best pintxos in the world! If you are looking for food, art, and a bit of sightseeing, make your way to the Basque Country of San Sebastián, as you will be eating heavenly food and witnessing some exceptional works of art.