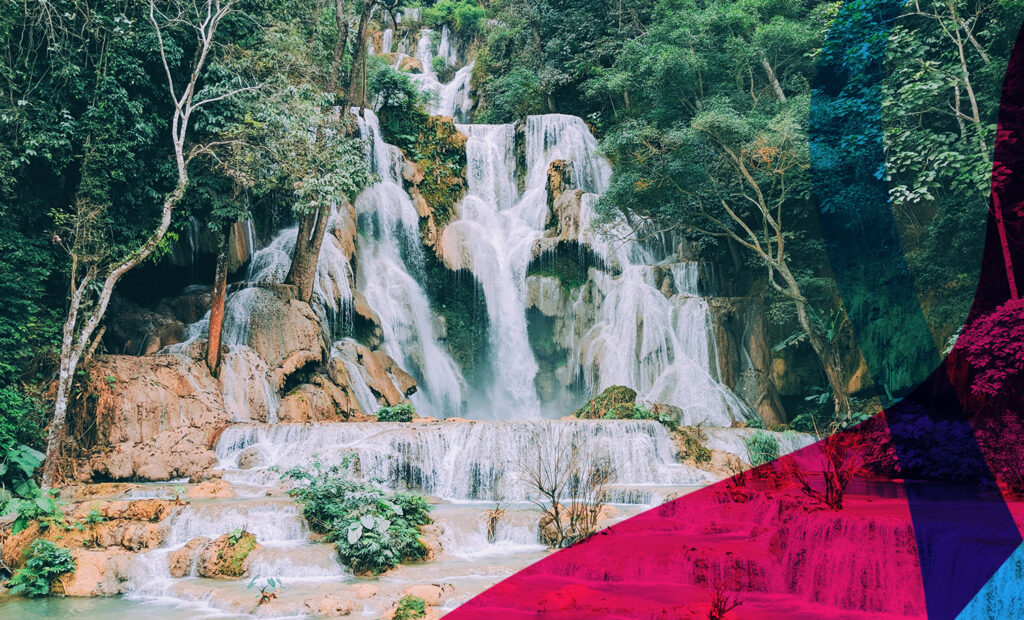 Luang Prabang means ‘city of the Golden Buddha Phra Bang.’ Since the 14th century, an 83cm statue is believed to be the source of the city’s protection. I traveled to this ancient, beautiful city in the north of Laos in November 2019, and it’s a place that has left a mark on me.

Back in 2016, the then president of the United States of America, Barack Obama, traveled across to Luang Prabang, drank coconut water with the locals and paid tribute to the Laotian culture and said, “If you are the United States, sometimes you can feel lazy and think, you know, we’re so big, we don’t really have to know anything about other people. That’s part of what I’m trying to change.” His visit made more people in America aware of the country’s history on what happened during and after the Vietnam war.

The town has its beauty and is partly located on a peninsula between the Mekong and Nam Khan rivers. Mountains are surrounding it as far as you can see. The city is quiet compared to its capital, Vientiane, where I also traveled to. But it has a serene atmosphere to it. That’s the part that makes Luang Prabang so appealing.

How to get to Luang Prabang

If you would like to experience the country by land, taking a coach or a minivan from Vientiane to Luang Prabang is an experience many people take on, as you can stop off at Vang Vieng on the way. The journey on the road can take up to 12 hours from Vientiane if you have no layovers.

I also heard that taking a boat over the Mekong is popular. This depends on where you are as you can travel in from Thailand or the Laotian borders. There are slow boats that can take up to 2 days with organized tours being available. These boats aren’t luxury, but an experience nonetheless. In one review I read, someone said, “The cruise was lovely. The river is ever-changing and settles your heart and mind into a meditative state. Not at all what I imagined and exceeded my fantasies.”

Where to stay in Luang Prabang

The best hotels and hostels in Luang Prabang are in the historic old town-ideally right on the Mekong. I walked up to a hotel that I liked the look of and negotiated a good deal. Sometimes that is the best way to do it if you know how to barter. A lot of the hotels offer various villas with old-fashioned rooms. The one I stayed in was next to a trendy bar/restaurant called Utopia. One of the highlights of that bar is the view of the Mekong river. Other hotels and hostels are nearby the bar and are all reasonably priced.

The best way to explore the city is by going for a walk. One of my friends who had visited in the past told me, “It’s the best part activity you will do when you are there.” One hotel guest also told me to “Stroll through town at night, especially when the night markets open.” They were both absolutely right. You can walk through town and eat from one of the street vendors or drink coffee in a cafe whilst discovering the city.

You can also hire yourself a scooter to get about as it is easily accessible and very cost-effective. However, I decided against this as I didn’t feel it was necessary.

Situated daily in the old town and right next to the Royal Palace, it is a colorful sight. There you can find countless stalls with souvenirs and handmade goods. You can definitely haggle a decent price; as I recall, I bought a bundle of t-shirts for about $4. One t-shirt I bought was perfect: a t-shirt with the caption “Same Same, but different,” which is a saying in Asia.

Another thing to consider when strolling through the market is street food. The locals set up stalls, and there is a variety of places you can eat from. There is a standalone street food place for vegans, and the street food from this place is by far the best you will find in Luang Prabang. There is usually a line of people waiting, and the man who owns it confidently told me, “This is the best food in town.” He wasn’t wrong as I was a returning customer.

Hiking up Mount Phousi for the sunrise or sunset

One thing you must do when you visit Luang Prabang is watching the sunrise or sunset at the top of Mount Phousi. It’s about a 30-60 minute hike up to the top of the mountain, depending on how fast you walk. But it will most likely take you longer as there are magnificent Buddha statues that you must stop and observe along the way. There is a well-known saying in Buddhism, “Never lose faith in yourself; you can do anything in the universe.” A motto many should ponder when recognizing the statues.

You have to pay a small entrance fee to get in, and once you do, you will be enriched with a beautiful view. Bear in mind, during the sunset, it gets incredibly crowded. My advice would be to start making your way up to the top at 3 p.m. as the sun begins to close in at 5 p.m. You will not regret it when you get the best spot to observe.

Luang Prabang has many temples to visit. The Wat Xiengthong, which was constructed in 1560, is the oldest temple in the city. One review I read before heading over there said, “If you have time to visit only one wat (temple), Wat Xiengthong is the one!”

The temple is of great importance to Laotian history and is the most visited temple in Luang Prabang. Furthermore, it’s a great illustration of the Laotian architecture of Buddhist temples. The main building is decorated with glass mosaic tiles.

Some smaller temples and statues reside on the grounds of Wat Xiengthong. It is open for visitors at a small cost in the daytime when it opens at 8 a.m. and closes at 5 p.m.

I mentioned earlier that the Royal Palace (Ho Kham) is next to the night market. Today it’s a national museum—another small price to pay to get in as well. I spoke to a fellow backpacker before heading there, and he said, “I think it’s one of the most beautiful rooms I have ever seen.”

You can discover many more temples around the city. But I would say those two are definitely worth putting on your list.

If you like your waterfalls, then the Kuang Si waterfall will interest you. The waterfall is outside of Luang Prabang and is located about 30 kilometers away. I would recommend booking a driver from your hotel; otherwise, it can get expensive, especially with taxis or tuk-tuk drivers. There is another small entrance cost which you will need to pay as well when you visit.

Another option you have is hiring a scooter and riding up there yourself, which is what one of my friends did when I was there. I asked him before booking my trip what it was like, and he said, “It’s a beautiful fall. The water is clear and clean.”

He wasn’t wrong. It was a beautiful fall. And there is a hike I would recommend whilst you’re there as well. The best time to visit would be early in the morning before it starts getting crowded.

I did ask a fellow tourist whilst I was there what he thought of it, and he said, “It’s probably the most beautiful waterfall I’ve seen during my travels in Southeast Asia.” I’m struggling to think of any other waterfalls I’ve been to in Southeast Asia. But Kuang Si does go high up on my list regardless.

The food in general, wherever you eat, is second to none. My recommendation would be to eat the street food. There are some nice cafes and restaurants near all the main attractions you can eat in as well. It won’t cost you too much either.

I mentioned earlier that Barack Obama had coconut water when he visited. The restaurant he went to was Mekong Sunset View Restaurant. It’s near the river, and you can’t miss it as there are pictures plastered all over the place of him. The best time to go is when the sun is setting.

One tradition you have to set your alarm clock for is, waking up and heading over to Sisavangvong Road at 5.30 a.m. to offer alms of cooked rice to Buddhist monks who dress up in their rich saffron-colored robes. This is an integral part of their cultural heritage, and it has been since Buddhism was first introduced to Laos. One local told me, “It happens everywhere in the country, but in Luang Prabang, it is more scenic because of the numerous temple surrounding you!”

My final recommendation is to head over and walk across the bamboo bridge. The hotel receptionist told me, “It is essential to cross that bridge, as the money they make from it goes towards rebuilding the bridge each year.” It is only open for six months due to the high water in the rainy season as it washes away the bridge. It has to be rebuilt each year, and the money they make goes towards the bamboos and payments to the family who rebuilds it.

Luang Prabang is very cost-effective. All the entrance fees for the temples will cost you no more than $2.50 each. Eating street food will only set you back by $2 the most for each sitting. The most expensive place I found to eat and drink in was Utopia, which can cost around $10 for a meal with drinks. This place is very popular with tourists.

You can get a very decent hotel that will cost you around $10 a night, but you can stay in plenty of hostels, which will cost you roughly about $3. My visit to the waterfall cost me $20, including the entrance fee and car hire.

In total, in the five days that I stayed in Luang Prabang, I spent just over $100.

Luang Prabang is worth every second of your time. If you are looking for an alternative city outside of Bangkok in Southeast Asia, think no more and head to the rich history and beauty that is Luang Prabang.