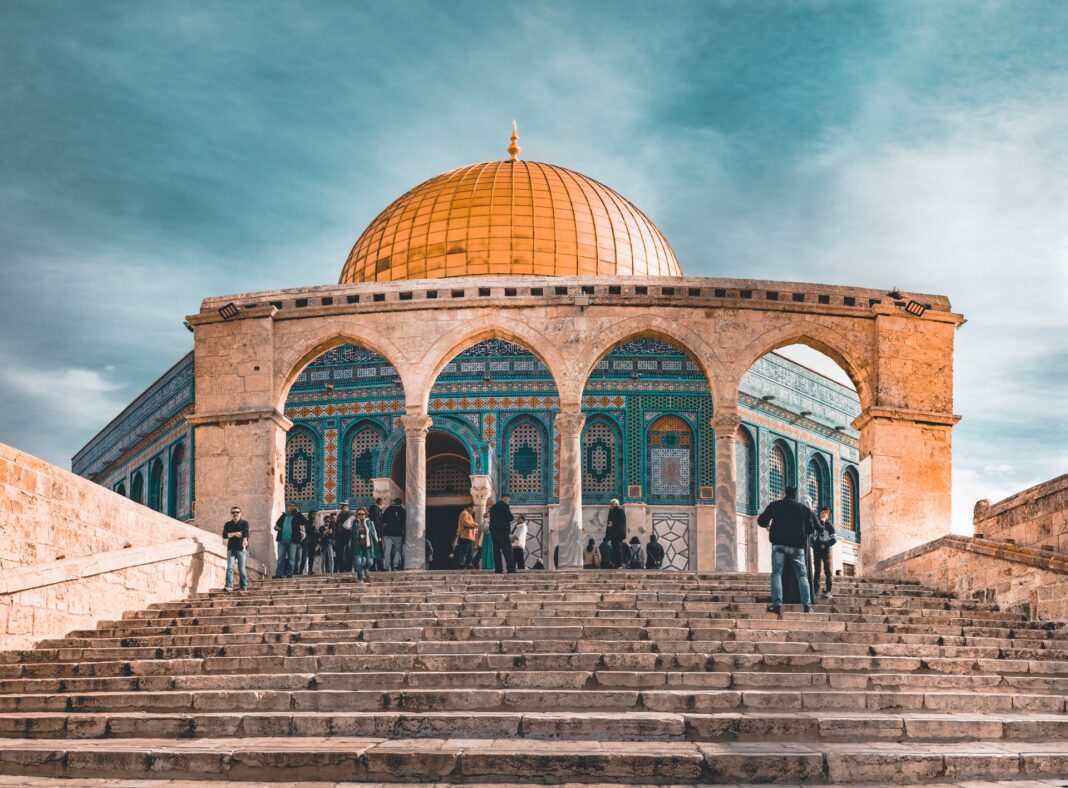 Visiting Israel is the journey of a lifetime for many.  Known as the Holy Land, it truly is a land of biblical proportions.  Many visitors arrive in Israel as part of an organized tour group.  Tour companies meet groups at the Tel Aviv airport, pack the luggage into the motorcoach, verify all individuals on the tour, turn on the air conditioning, review the itinerary and then drive to the first site. If you can’t sleep on an airplane, hotel check-in is not until late in the day, and so is your next meal.

Knowledge of the sites in Israel is essential to get the most memorable of experiences. Here are the top places that should be on any itinerary and two fantastic places to dine.

Tel Aviv is known as Israel’s party city and financial center.  In reality, it is Israel’s premier beachfront city that is nestled along the clear water of the Mediterranean, with its skyline shaped by the grand hotels that line its shore. Locals and visitors make this their playground.  In case hunger strikes, there are many food vendors along the beach that will be all too happy to provide local culinary favorites and bring them to your chair.  Having a relaxing coffee or any type of drink on the beach, your feet in the soft sand from the comforts of your chair is quite a treat.

Located approximately 34 miles north of Tel Aviv on the Mediterranean Sea’s North shore, Caesarea was once the capital of the Roman Province of Judaea. It was a thriving port city and was mentioned many times through biblical history. Upon entering the grounds, one is met with a number of life-sized sculptures that have been unearthed on the site. The most impressive architecture within the grounds is the Amphitheatre, a hippodrome where chariots raced around a “U-shaped” track and prisoners fought to the death, all for the enjoyment of the spectators.

Other artifacts found here include mosaics, a palace, and stone seating, but some of the stone seating were actually the toilets of the time.

3. Cruise the Sea of Galilee-Tiberias

Tourists flock to the dock at Tiberius to get on motorized boats built in a style unique to the area.  The majority take the boat trip as part of their religious pilgrimage, while others wish to enjoy a tranquil sunset cruise while looking at the glow of the city lights along the shoreline.

The boats are complete with a sound system, and everyone in the group receives a certificate commemorating their journey on The Sea of Galilee. Adjacent to the dock is a museum where the remains of a more than 2,000-year-old fisherman’s boat discovered nearby is displayed.

Masada is a protected UNESCO world heritage site and one of the most popular tourist destinations in Israel built by King Herod The Great between 37-31 BC.

Masada means “fortress” in Hebrew and is built on a massive plateau/mountain that overlooks the Dead Sea and surrounding desert area. A cable car takes visitors up to the top of the mountain fortress or if you are physically fit, take the long, winding path up. Masada is famous for being the last stand of the Zealots in the Jewish Revolt against Roman troops from (73 – 74 AD). This first Jewish–Roman War ended in the mass suicide of the more than 900 Zealot rebels who were barricaded inside. Among the ruins are King Herod’s Palace, which sprawls over three rock terraces and a Roman-style bathhouse with mosaic floors.

Located in Northern Israel, Beit She’an is currently the largest ongoing archeological dig in Israel. This area dates back some 6,000 years and has had many names over time. It is best know in biblical terms as the site where King Saul and his sons were hung from the city walls after the Israelites suffered their defeat against the Philistine army on Mount Gilboa.

Visitors get an unmistakable picture of what a Roman city was like.  Walk thru colonnaded Roman streets to the Roman theatre, to Bathhouses, to the ornate mosaics displays, to temples; in short, it’s a whole Roman city that time has preserved.

A visit to Old Jerusalem is never complete without a walk to The Western Wall, also referred to by many westerners as the “Wailing Wall,” located near the Temple Mount (Gold Domed Building).  This is the holiest site for all Jewish people next to the Temple Mount. Over half of this wall’s total height is located more than 50 feet below street level, where a labyrinth of tunnels takes one back in time to the beginning of this great temple and Jerusalem itself. The Western Wall is the remaining portion of the majestic temple that King Solomon built.

Men who would like to go up to the Wall must wear a hat.  A Yamaka hat is provided free of charge to men who do not have a head covering.

Women must be separate from the men’s section in a smaller area of the Wall.  They may borrow shawls and short-skirt coverings at the entrance if they are not dressed in accordance to custom.

7. Float on the Dead Sea

The Dead Sea is the lowest point on earth (more than 1,365 feet below sea level) and contains the highest concentration of salt in the world. Locals like to joke with the tourists that ask the most obvious of questions, “Are there any fish in there?”  Locals promptly will respond, “No, just the people that float in the water.“

Nothing you can do will make you sink, no matter how big you are. The best way to float is to walk in backward until the water is at your knees, kneel or sit in the water, and then just layback.

A few words of caution; do not put your head underwater because your eyes will painfully burn, and do not swallow any water, you may get very sick.  The Dead Sea is not meant for swimming/diving underwater, it is only for floating on your back…but what a mind-blowing experience.

Qumran is an archeological site located in the Judean Desert, about one and one-quarter miles from the Dead Sea. They are caves cut into the surrounding hills, so why is this area an important archeological site?  In 1947 a young shepherd boy went looking for a lost sheep, which he thought was in one of the caves. The caves were very dark so he called and tossed rocks in the caves to hear if there was anything in them. He did hear a sound in one of the caves.  The sound came from the stone hitting what turned out to be stone jars. He discovered many jars containing The Dead Sea scrolls, dating back more than 2000 years. The contents sealed in the jars make up the oldest copies of the Hebrew Bible ever found. These scrolls can be seen at The Israel Museum “Shrine of the Book.”

Nazareth Village is a working reconstruction of what life was like in the biblical town of Nazareth more than 2000 years ago.  Located in the bustling city of Nazareth, re-enactors dressed in period clothing, tend to livestock, work a 2000-year-old olive press as women gather olives (in season), carpenters plying their craft and weavers making threads and yarn in their homes. It is an archaeologically accurate re-creation of the hometown of Jesus of Nazareth.

Visitors are given the opportunity to observe, participate and learn each activity.  Step back in time more than 2,000 years and walk along the paths of Nazareth village, peaking into the workshops, fields, and homes of the people.

This is one of the oldest markets in Jerusalem.  If anyone wishes to visit, just ask for directions to “The Shuk” which means Market.  Few other places come close to Shuk Mahane Yehuda where the sounds of vendors calling to everyone to come into their shops, to taste their products, to buy produce, fruits, vegetables, baked goods, fish, meat, cheeses, nuts, seeds, clothing, shoes, textiles, souvenirs and anything that pertains to Jewish life and customs.  The most exciting time happens when negotiating a price with the vendors…it becomes a show on its own.  Music is played throughout the market and the aroma of all kinds of spices will grab your attention.

“The Shuk” is located off of Mahane Yehuda Street in the Jewish Quarter of Jerusalem…it’s a real treat!

Decks is a very popular restaurant in Tiberius and named after the two decks that stretch out into the Sea of Galilee. The menu includes lamb and cattle that are grown by farmers specifically for Decks, locally caught fish and produce. They grill using charcoals from olive, citrus and nut trees giving their dishes a unique taste and smell.  Dining at Decks is an experience and if you are fortunate to be there on a night where there is a celebration like a Bar/Bat mitzvah or any special occasion, you will be entertained as the lights are turned down and a small vessel cruises close to the restaurant, music plays and fireworks from the vessel brilliantly illuminate the sky. Decks Restaurant is located on Gdud Barak Street in the city of Tiberius on the western shore of The Sea of Galilee.

The Eucalyptus Restaurant is located outside the Old Jerusalem city walls at Hutzot Hayotzer, a lane that is comprised of arts and crafts shops. This place is well known throughout Israel and its Chef/Owner, Moshe Basson is renowned internationally. He is noted for his use of biblical ingredients in the dishes he creates which include wheat, barley, grapes, figs, pomegranates, olive oil, and date honey” in their dishes.

Chef Basson’s signature dish is his “maqluba,” prepared with chicken, browned vegetables, and rice in a very large pot. The restaurant even has a ceremony accompany this dish. He gets a guest to participate as he tells the biblical story of the Israelites going around the walls of Jericho 7 times before the walls crumbled. His guest moves his/her hand 7 times over the pot and then together they the pot and the dinner falls out on a large serving plate.

The food here is incredible with a fixed menu.  Call ahead and book reservations, due to their popularity, they fill up very quickly every night.

Tips for your trip to Israel

• Make sure to pack a few pairs of very comfortable walking shoes. Many of the most commonly visited sites require extensive walking, climbing and hiking.

• All tours provide some sort of meal plan.  Selection is not as good during high holy days such as Ramadan or Yom Kippur, each Sabbath or Shabbat (from sundown on Friday through nightfall on Saturday).

• The majority of tour operators will tell you that the bus is private and no other individuals are allowed on the bus that are not part of the tour.  Some guides will take advantage and are provided a commission on every item you buy.  It is a safety issue, unauthorized individuals should not be allowed on the bus!

• The same holds true when the guide tells everyone that they know the best places to shop along the tour. If there is no interest in stopping for the items the guide suggests, say no!

• To judge how clean a hotel room is, check under the bed.  This is the one place that most hotels fail in keeping clean. If the room is not up to standards, raise the issue with your tour group operator and hotel management.  Remember, after you check out, say good-bye to any compensation.

• Make sure you do not spend more time in the tour bus than actually visiting the sites.