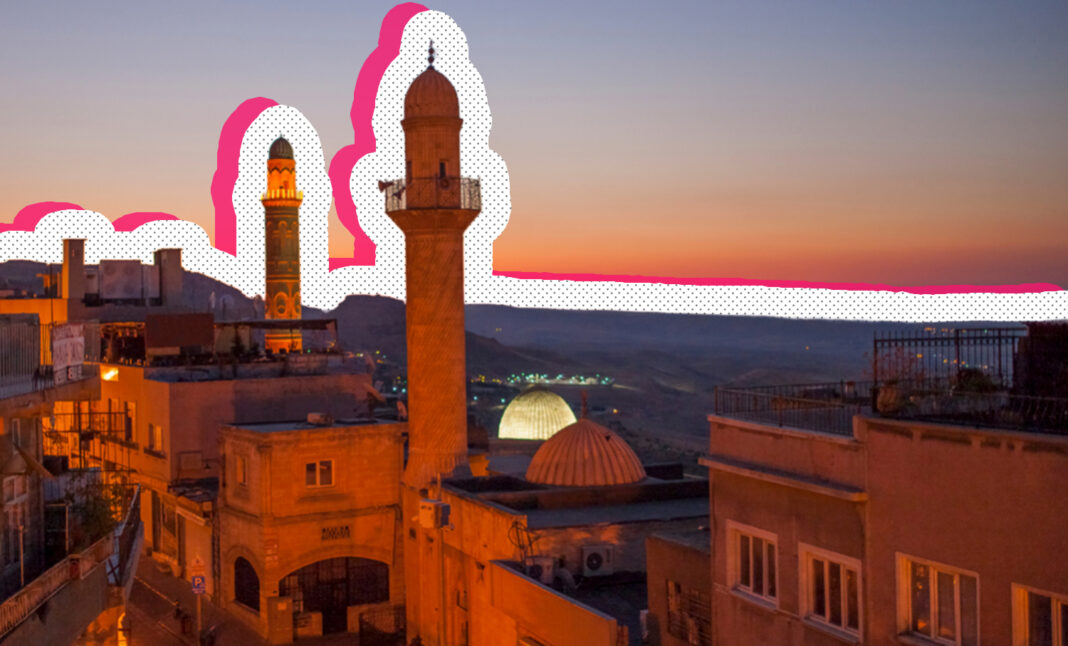 Looking for a gem?

What is the first place you think of when someone mentions Turkey? Of course, it’s going to be Istanbul. Don’t get me wrong; I love Istanbul. But what if I said you could go to a spot in Turkey, get all the cultural experiences, get treated like royalty, with guaranteed warm weather, and have fantastic food. Well, Look no further than Mardin.

When I booked my trip to Turkey, I had no plans on going to Mardin. In total honesty, I had never heard of Mardin and had no idea where it was. But if you know me as an explorer, I love to wander off the beaten paths. Usually going with the flow, with no concrete plans.

When I had enough of Istanbul after a couple of days into my trip back in September 2020, I started asking locals, particularly travel agents, about where I could travel to next whilst I was in Turkey. Everyone I spoke to kept telling me I had to travel southeast of the country. Few places kept getting mentioned, and one of them was Mardin. One agent said to me, “sir, please, you must visit Mardin. Please, sir, you must.” Another agent said, “I am telling you, sir, you must trust me; you won’t want to leave when you are there! It is like a movie set.” And the manager of the hotel I was staying at, Hakim, said he was from there and told me, “Mardin is the epitome of Turkey.”

When I googled Mardin and started looking at photos of the old town, I knew I had to make my way down there as soon as I saw the pictures. It took me a couple of weeks to do so as I travelled mainly with coaches, stopping off at Cappadocia, Kayseri, Adiyaman and Diyarbakir on the way. All of those places I can write articles on as they were beautiful in their own right. But I travelled on the road because it was the best way to see the country and the most cost-effective way in terms of budgeting.

As I travelled in September 2020, still at the height of the COVID-19 pandemic, everything was at a bargain. Which meant I could have flown to the nearest airport to Mardin, which was Sanliurfa from Istanbul, for only $12. And they were allowing people to submit one luggage for free as well. This is guaranteed to change once the pandemic is over.

But, it was good to fly cheap then if you were looking to save time. I had time on my hands, and as I decided to use the road, the total cost, which included coaches and a van, was around $50. Worth it if you wanted to see the country by land. And I was able to get tickets at coach stations as well.

Due to Covid measures, I needed to prove I could travel on public transport with a reference code, which I had to buy. If I am honest, I wasn’t sure how it proved I didn’t have the virus as I didn’t need to do a Covid test each time either to board a coach. But I wasn’t complaining as it allowed me to move around. Again, this should change when we go back to some normality.

When I arrived in Mardin, it was every bit as stunning as the pictures I had seen. The most extraordinary part for me was my hotel. I stayed at the Zinciriye Hotel, located in Medeniyet Sehri, next to Zinciriye Medresesi, overlooking the old town, which included the Great mosque. There was also the Mardin Castle towers above my hotel on a rocky mountain. When I went, I couldn’t enter the castle, but I could walk towards it using the steep path that leads up to the castle, starting from the Zinciriye Medresesi.

When I was wandering around, it wasn’t easy to communicate with people as English was almost non-existence amongst the locals. That could be an issue for anyone going. But I managed to find one guy and asked him whether the pandemic had caused problems with local businesses, and the gentleman said it had no discernible effect. He told me, “Mardin gets a lot of Japanese tourists, but because of Covid, that has stopped.”

Apart from that, he said not too many people go to Mardin, as it is unknown to the world. Which meant business wasn’t all that affected. And I didn’t see a single other backpacker or tourist whilst walking around the first few hours. I loved it because I felt as though I had the whole place to myself.

I mentioned earlier, one of the travel agents told me Mardin is like being on a movie set. Well, he wasn’t wrong. I felt as though I was on a movie set for Aladdin. I kept imagining Aladdin himself would pop up with Princess Jasmine. In fact, I actually did meet crew members who were filming for a Netflix series, The Gift, at a rooftop restaurant. I met them as one of the guys helped me by interpreting my English into Turkish as I struggled to get across a point to a waiter. When I asked what he did for a living, he told me he was a filmmaker and said that they were shooting the final season of the series in Mardin. I spoke to all of them, and they were all charming. I haven’t seen the series yet, so I can’t comment on whether it’s good or not, but I have it on my saved list.

Apart from what I have mentioned, a few factors explain why I believe Mardin is a must when visiting Turkey. The city has often been considered an open-air museum because of its historic architecture. As I wandered through the cobblestoned streets and narrow alleyways, I could not help but notice the landmark houses where residents lived. It reminded me of the medinas in Marrakech, Morroco. Or the homes in Santa Marta, a favela in Rio de Janerio. The architecture has been preserved superbly considering how many centuries ago they were assembled. As I said, the old town is protected under conservation. Being surrounded by these buildings felt like I was part of great history.

Another highlight for me was visiting Ulu Cami (the Great Mosque). The mosque was built around the 11th or 12th century as plaques placed there date back to the Seljuk, Artuqid and Ottoman period.

As I entered through the gates of the mosque, I was welcomed by an expansive courtyard. The minaret is unique in its design, and like most mosques, there was a calm presence. The only thing that you will need to get used to if you are staying in the old town is the call for prayer at the break of dawn. Trust me, the only part of my visit I didn’t particularly appreciate as it disturbed my sleep at 5am each morning.

Mardin’s bazaar was also very unique. The area spills down the slope, off the main street of Cumhuriyet Caddesi. Quite a lot of the lanes can’t be accessed by cars, as donkeys are still used for transport by some traders there. This is an integral part of the city that I soaked up. I stopped off at local shops, had baklavas and other sweet pastries with Turkish tea. The hospitality was exceptional as I was treated like royalty.

I even decided to get a cut-throat shave. I decided on this as I remember watching an episode of the BBC Travel Show, where Henry Golding made it look so good and an essential part of something all men should do when they visit Turkey.

All in all, this was a thriving local bazaar with vegetable and fresh produce sellers. Fresh spices were on offer, and there were shops selling everything from clothes, bed frames to kitchenware. There were traditional craft workshops with woodworkers, metal workers, and other artisans. It was a fascinating place to go for a stroll.

There are many places you can go and dine in; as I stated earlier that I met crew members at a rooftop restaurant. Well, this was the Seyr-i Merdin restaurant & cafe. You can get a bird’s eye view of the whole of Mardin from that rooftop. The food there was good; I wouldn’t say it was amazing. But you have to go there just for the view.

Another place I was told to go and dine in was Bagdadi. The receptionist at my hotel told me that it was the “best restaurant in town.” And he wasn’t wrong. I liked it that much that I went back another evening. The service was excellent, and the food was exquisite. I would highly recommend sitting outside as well to absorb in the atmosphere. A fantastic restaurant and I recommend ordering the ‘Bagdadi Tavuk’ if you go.

In terms of costs, Mardin is very cost-effective. My hotel stay was $12 a night, which included breakfast. I booked this via booking.com. For a top hotel, this was very economical. And this had nothing to do with the pandemic. As I said earlier, the city isn’t overflowing with tourists in normal times.

Bagdadi restaurant cost me around $15 for a sit-down meal, including drinks, starters, main course and a dessert. That is the most you are going to pay in Mardin for a top restaurant. The rooftop restaurant Seri-y-Merdin on the other hand cost me about $4, which included a few drinks and my meal. There were other decent restaurants & cafe I could have gone to and eaten for even cheaper, but because everything is catered for the locals anyway, it didn’t matter where I went to eat, as I felt like I was dining with the locals anywhere. Even Bagdadi was catered for the locals rather than tourists.

There weren’t any costs to visit any of the big attractions, as the city is an open-air museum. Apart from buying souvenirs, which I haggled a reasonable price for, the food and the cut-throat shave, you will be struggling to give your money away.

In total, I spent less than $100 in three days, which included my hotel stay as well.

How long should I spend in Mardin?

For me, I didn’t have a time limit on how long I was going to spend in Mardin. I played it based on how I felt, usually how I go about all my travels. I spent three days there, which was enough time for me to see everything. And I did a mixture of exploring, relaxing and enjoying the surroundings.

At the time of the year I went, the weather was glorious. Temperatures rose as high as 35C/95F, with no humidity. It was perfect conditions if you love the heat.

What made the place for me was the people—very generous and welcoming individuals. I might add that since the Syrian War in 2011, many Syrian refugees have fled their homes and settled in Turkey. Mardin is one of those places, as it nears the border with Syria. I met quite a few of them, and they were all pleasant.

My overall experience of Mardin, I must say, was phenomenal. If you are looking for an off the beaten path to visit in Turkey, look no further than Mardin. With its ancient architecture dating back centuries, its characteristic city landscape, majestic culture, ancient and religious sites, Mardin is a stunning open-air museum for visitors from all over the world.