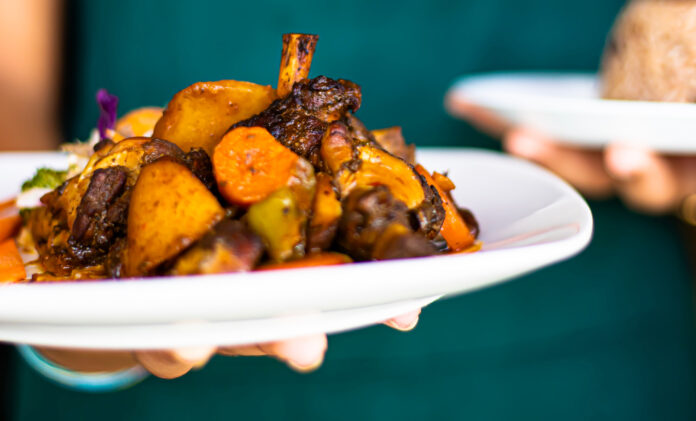 The Caribbean is known for its delectable food that largely originates from a fusion of many different countries that would have established roots in the Caribbean.  The food has been influenced by cuisine from all over the world specifically Africa, Europe, India, and China.

Let’s explore some of the must-try foods when visiting the Caribbean. Heading first to one of the largest and most well-known Caribbean islands for their cuisine, these are the best foods to eat while traveling the Caribbean.

Jamaica is an island nation with a population of 2.9 million people and is located in the Caribbean Sea with neighboring islands being Cuba and Haiti. This island is well known for its tantalizing cuisine and is probably the most popular and revered Caribbean cuisine you will see outside of the Caribbean as there are so many Jamaican restaurants all over the world. Below are some of the best Jamaican dishes that you need to try when you visit the island.

Jerk Chicken is one of the most highly-regarded Jamaican foods, known for its savory flavor and fiery seasonings.  This dish is not for the faint of heart.  The jerk seasonings combine to form a flavor that is savory with a tinge of sweetness.  What makes the dish fiery is the Scotch Bonnet Peppers. These peppers combined with allspice, nutmeg, thyme and other seasonings give Jerk Chicken its signature taste that has caused it to spread all over the world.

The meat is then cooked over wood from a pimento tree. Then the seasonings merge all together when they get covered by a metal sheet.  This dish is a ‘must’ when visiting the island of Jamaica.

Jamaica’s prized national dish consists of salted codfish and ackee and is typically served as a breakfast meal in Jamaica. You are probably wondering at this point, ‘What’s an ackee’?  An ackee is Jamaica’s national fruit and has a slightly nutty taste, however, is wonderful at taking on the flavor of whatever dish it is cooked with. When the ackee is picked ripe and served cooked, its texture is extremely close to a scrambled egg. The ackee is paired with saltfish which is typically fried with onions, tomatoes, and seasonings, and is worth trying if you ever visit the island.

The next Caribbean island known for many of its specialty dishes is the island nation of Trinidad and Tobago, affectionately known as T&T by locals and other Caribbean islanders. The nation of Trinidad and Tobago, which consists of two islands, is located very close to Venezuela with a population of approximately 1.3 million people.  This island nation’s food is known to have so many influences from areas like India, China, Syria, and Africa. Here are some of the most well-known Trinidadian dishes you need to try.

Legendary and well-known as one of the most popular Trinidadian street foods.  This delicious snack is served any time of the day but is traditionally eaten during breakfast.  Additionally, after a long night of partying known as a “lime” in T&T, it’s a popular late-night snack and you will see lots of vendors on the road selling it.

Doubles are two pieces of fried flatbread that are called ‘baras’.  In the middle is flavorful curry ‘channa’ or ‘chickpeas’ in other parts of the world.  The best part of this delectable snack is how you can add a variety of condiments to add to the flavors. You can add condiments such as tamarind sauce if you want a sweet tangy flavor or pepper sauce if you’re looking for something more local to T&T. Pepper sauce is a fiery yellow sauce that has Scotch Bonnet Peppers that takes the heat up a couple of notches on this dish. Another popular condiment is ‘kuchela’ which is made from green mangos as the base and combined with peppers and other spices.

One of the most common dishes in Trinidad that originates from the island is the ‘Wrapped roti’ known simply as ‘roti’ throughout the Caribbean. A roti is a flat dough bread filled with a curry stew with meat that can come from a wide range of animals such as chicken, beef, codfish, shrimp, and goat, or in some cases vegetables such as potatoes and pumpkin.  The flatbread can either come plain or with ground up split peas throughout the skin also known as ‘Dhalpuri’. The other type of roti commonly found throughout Trinidad is called ‘Buss up shut’ which is when the dough is broken into pieces and dipped into a stew of your choice. Two popular condiments to accompany the roti is pepper sauce and mango chutney.

The Caribbean is filled with so many amazing cuisines that listing them all out in one article would be impossible. If you ever plan on visiting Jamaica or Trinidad and Tobago though, then we hope that this quick food guide will be a great starting point for you to dive into the wonderful world of island cuisine. Enjoy!

10 Incredible Experiences You Can Have on The Island of Hawaii

Beaching on a Budget: How to Plan a Beach Trip Without Breaking the Bank