Home » Sleepless in the UAE: The Ultimate Solo Female Layover

Sleepless in the UAE: The Ultimate Solo Female Layover 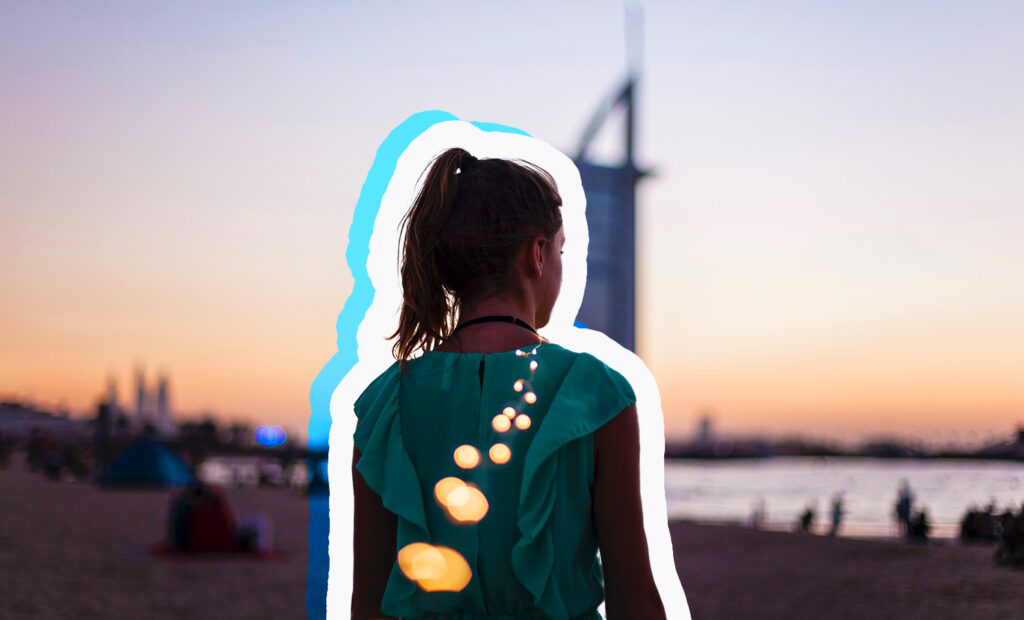 A lot of things in this world can hurt you but monotony is one of the biggest threats of all.

Standing barefoot in the evening Dubai desert in 130-degree humidity to procure what would become the most refreshing Corona of my life, I smiled to myself for having pulled off the layover of all layovers. Desert sand coated my sweaty skin like a sticky sugar donut. My boarding pass was damp but safely crammed in my pocket, for I was in between two intercontinental flights, having flown in from Johannesburg that morning, and was due to depart for Toronto at 3 am.

Year-round, I live in a remote fly-in community in Canada’s Arctic, and staying within a two-mile radius of your home wears thinner than Spring ice rather quickly. The relief of being out of that town is akin to an asthmatic grasping an oxygen mask and as I booked a South African safari that I’d spent years saving for, I decided to add a 21-hour layover in the United Arab Emirates. People asked me if I was scared, practically whispering because I was, you know, a solo female traveler. They knew I’d be swimming with great white sharks, a popular adventure activity in South Africa, but what people were mostly asking about was being alone in the Middle East. I’d like to tell you that I wasn’t scared but the truth is, I wasn’t being brave either. I was more of a blank slate. I figured that even if something went wrong, at least it would be something new. And so, I grabbed an oxygen mask and booked the ticket.

I knew that I’d be fine traveling alone in Dubai, but I didn’t want to ignore that neighboring Saudi Arabia had only begun permitting women to travel alone six days before my arrival. It was my first time setting foot in Asia, let alone the Middle East, and in an effort to be adventurous without being too naive, I opted to take the bright pink “women only” taxis as a first step. My first breath of Dubai air felt like trying to drink a too-thick milkshake through a tiny straw and as a perpetually cold Canadian, I instantly loved it. I was only outside on the curb for all of three seconds before being whisked away by a woman in a bright magenta hijab, the uniform of all of the pink taxi drivers. She introduced herself as “Moonita, but you can call me Moony”, floored it, and led me into Dubai.

I’m known to travel like a hummingbird, flitting fervently between activities and never sticking at any given place for too long. I told Moony my chaotic plan to visit multiple Emirati landmarks all in one go, starting with the Sheik Zayed Mosque, and that like Cinderella, I had to be back at the airport by midnight. It’s one of the most stunning sites in the UAE. Moony kindly smiled at me in the rear-view mirror and asked me if I trusted her to be my guide. It turns out the mosque wouldn’t open for a few hours so we zigzagged across Dubai while she taught me about the ongoing construction to build a tower even bigger than the Burj Khalifa (because in Dubai, newer means better), took me to the Gulf shoreline and pointed out that if I kept going straight, I’d end up in Iran, drove me along the Jumeirah Palm, took me to the iconic Atlantis resort, and even helped me navigate a gas station ATM in Arabic.

Hours later, we arrived in Abu Dhabi and Moony dropped me off at the elaborate underground labyrinth of pristine white tunnels and moving sidewalks that led to the Sheik Zayed Mosque. I was among the first travelers to arrive that morning and helpful guides offered me the choice of a navy, sage, or maroon abaya, a full-length loose garment for women reaching to the ankles and wrists, with a hood. I opted for navy and before long, all I could hear were hushed voices and continuous camera clicks as the mosque came into view. I was surrounded by towering white minarets and endless rows of dizzying white and gold columns. I was entranced by the tiled vines that began on the floor and slowly crept up the ornate pillars to burst into mosaic bloom, making the mosque a spiritual oasis in the desert. Standing silently in awe, I was approached by a guide with a radiant smile named Shama. Shama joyfully dove into the history of the mosque, teaching me it was named for a sultan known as the Father of the United Arab Emirates who passed away before the mosque was finished. Years ago, I’d attended a social at a local university’s Muslim Student’s Association and I smiled as I remembered how I was called Sister then, just as Shama did now.

I graciously thanked Shama, glad to have learned how to say thank you in Arabic (shukran) and found Moony. She took me back into Dubai and we said our goodbyes as she dropped me off at the famed Jumeirah Beach, where I could frolic in the rolling waves of the Persian Gulf in view of the sailboat-esque Burj Al Arab. Within minutes of arriving, I was standing in a bikini with my feet in the tepid water listening to the nearby Islamic call to prayer. The juxtaposition of my morning and afternoon attire and activities was striking and illuminated to me that there is no singular definition for social norms in Dubai.

Several taxis, landmarks, and water bottles later, I had found my desert safari group and we were driving in a tourist parade of white SUVs. The highway before us was scattered with wisps of ginger sand, reminding me of a snowy highway back home. As we pulled into the parking lot to ride ATVs, our convivial guide, Aftab, nonchalantly tells me how we have left Dubai and are now in Sharjah. I froze. I didn’t realize we’d be crossing into Sharjah, as I knew drinking alcohol was illegal there yet the very tour I was on came with “unlimited alcohol”. Aftab laughed and told me not to worry, and that we were just here for the ATVs and then we’d be back in Dubai. Reassured and elated to be surprised with my third Emirati state of the day, I reflected on my mom’s advice to “try and blend in” when traveling alone, especially now that I knew I was in a stricter place. Wearing a bright red “CANADA” shirt with a red and white checkered ghutra headscarf, riding in the desert sand, I figured I’d pause my ATV to grab a quick selfie. Unfortunately, when you stop driving in the sand, your vehicle sinks, and over the next half hour, I got stuck not once but twice. The second I was free, I’d yell “shukran!” and instantly continue zooming throughout the rolling dunes. Everyone has that moment when they’re traveling and everything just seems to click. For me, this was that moment.

Back in the SUV, everyone was now wearing the same red and white headscarf like kids on a class trip. Aftab took us dune bashing, the self-proclaimed favorite part of his job, and we made our way at last to the bedouin camp. As I walked in, music thumped, shisha smoke hung in the air and a lone man walked through the growing crowd under the stars selling photo ops with his pet falcon. I could see camels up a tall dune dotting the dusk horizon and the camp itself was resplendent with colorfully patterned rugs and low stools arranged around the belly dancing stage. I used the last of my energy to ride a rather cantankerous camel and headed right to the bar, bringing me back to my moment in line waiting for a Corona after triple-checking with Aftab that we were definitely beyond the boundaries of Sharjah.

As I finally sipped the revitalizing cold beer, I thought about how I have never felt freer than riding that quad in the desert. I thought about everything I’d set out to do in the past two weeks and what I’d faced, from having a hyena on my verandah, coming face to face with great white sharks, and scaling a mountain on a hike I had absolutely no business doing, to going to the Middle East alone. Some might call those activities dangerous, but fear can be the universe’s way of telling us we’re still alive. Perhaps it is a bit extreme to fly from one side of the world to two other continents in an effort to escape the mundane, but a fulfilling adventure quenches a thirst far stronger than any felt in the desert that day. I’d learned that I do just fine on my own. Motorized activities excluded, I thrive.