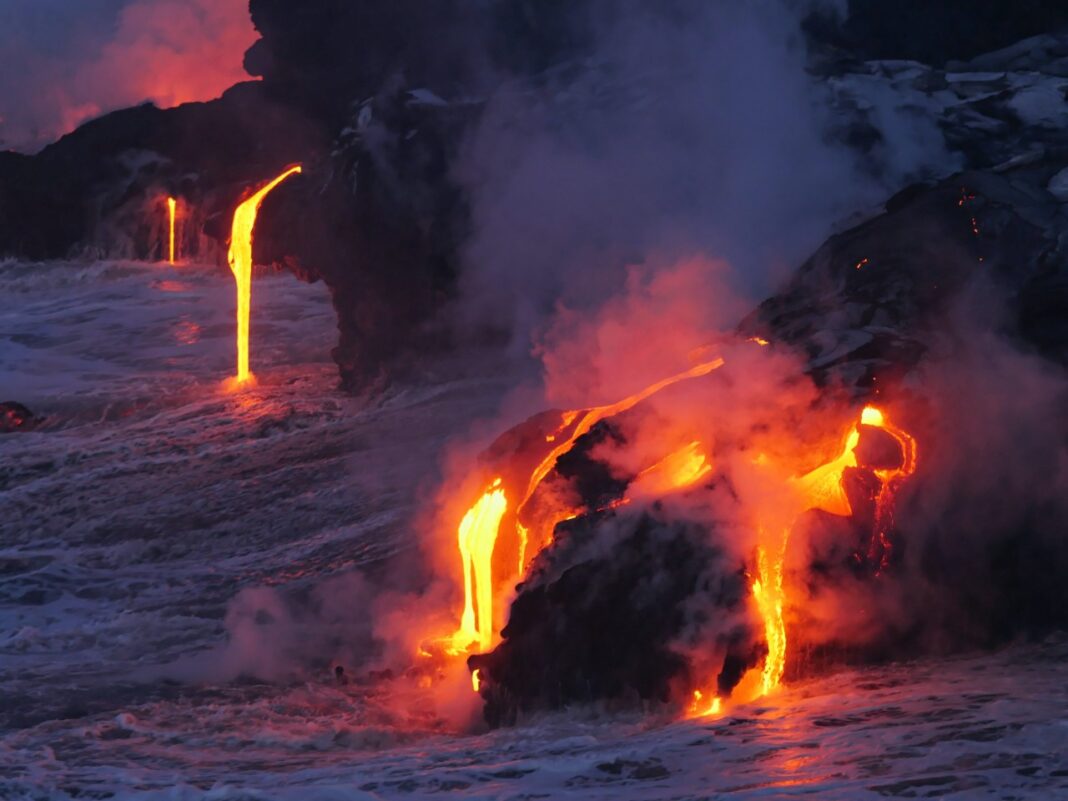 Sponsored: Ready to visit Hawaii? Book your next getaway with Maupintour.

I turn my head, peering through the waves of dry heat, and gasp when she comes into focus. She’s slowly peeling her shoe off the hot black rock. Jess is next to me, wide eyed.

“Oh my god,” she mumbles. “Look at her shoes.” She locks a fierce grip on my arm and screams, “Meg! Turn around!”

“We need to get off this freaking lava,” I say.

I look around me – there are eight of us daring, or crazy souls and two guides walking in a loose circle towards the glowing edge of the lava. I glance behind us at a wall of smoldering jungle. We walked through a forest fire to get to where we now stand. I swallow the sulfur taste in my parched mouth and turn my head back. Through the currents of heat and billows of smoke, I catch a glimpse of one of the tourists wandering away from the group with stumbly steps towards a burning mass of Hapu Ferns. I glance back at Meg – the face of fear taking cautious steps backward. I feel a panic rising from the pit of my stomach. It’s May 2014. We’re on Hawaii Island, hiking along the fringes of the East Rift Zone of Kilauea Volcano.

My wife and adventure buddy, Jess works as a travel agent, and through her connections, she was able to book us on a guided hiking trip that would supposedly take us directly to the fiery edge of the lava. The three of us – myself, Jess, and our friend Meg – made an early morning drive from the west coast across the saddle between the island’s two huge volcanos to Hilo town. From Hilo, we drove south to Pahoa – a small village with a hippy vibe – and met the shuttle that would take us to the trailhead. The tour company was new, and they proved their inexperience when they picked us up in a minivan at a gas station. The three of us shot furtive glances at each other. Is this a legit company? The guides aren’t even wearing company logo shirts. Is it safe? But they did have something no other tour company could compete with – access to the lava. Due to the incompatibility of human curiosity and burning lava, Hawaii Civil Defense had been working hard to keep people away from the lava. The most recent breakout was on private property and this tour company was the only one that had access to the land. The legality of it all was blurry, but we couldn’t pass on the potential adventure. So we piled undeterred into the grimy vehicle.

The drive was sublime, and our thoughts were consumed with images that had been plastered in the recent news – fiery tongues of molten rock consuming homes, roads, trees, beaches. Our stomachs churned with nascent fear. We were about to hike to flowing lava, a once in a lifetime experience. The Puna district on the southeast side of the island is the wettest region of Hawaii Island and is also Pele’s playground, the back yard of Kilauea – one of the most active volcanoes in the world. We witnessed the jaw-dropping beauty of this world defined by contrasts as the shuttle took us away from the Victorian-esque buildings and wooden boardwalks of downtown Pahoa. We traveled down country roads through stark black fields – either smooth and ribbon-like pahoehoe lava or jagged and crunchy a’a lava. The lava flows would end abruptly, and the original flora of old-growth rainforests would reappear.

The minivan pulled over on the shoulder of a two-lane road that had twisted through a grove of broad canopied Albizia trees. The driver told us that the trailhead location changed daily as they tried to find the most direct route to the leading edge of the flowing lava. Thus, there really wasn’t a trailhead, per se. We clambered out of the minivan and followed the machete-wielding guides into a dense tropical jungle. They were literally cutting the trail in front of us. The moss blanketed forest floor was spongey and thick with twisting and overlapping roots. The sun was already searing the humid air – preheating the morning as if to portend the blasting dry heat that awaited us at the end of the hike.

Two hours into the hike, the sight of smoke in the distance and the sulfur flavored air let us know we were approaching the lava flow. We were already exhausted, drenched in sweat, and slapping at bugs and the tentacles of Hapu Ferns that would stick to our wet ankles as we marched towards our fiery destination. We stopped at the edge of the forest – where all life had ceased, consumed by Pele’s relentless approach. Pockets of trees were still smoldering and would occasionally burst into flames. In front of us, there was nothing but black lava. The guide explained that the lava we were looking at, and about to be walking over, was pahoehoe – smooth lava that flows in sinuous ribbons that cool from the outside-in and create underground lava tubes. He said it was safe to walk on even though there would be flowing lava in the tubes underneath our feet. We had done our own research and understood that although our guide was correct, he failed to mention that the top of these lava tubes – on which we would soon be traversing, were fragile and prone to collapse. But, what’s an adventure without a little danger?

We followed the guide onto the lava – our steps tentative as we wondered if the fragile-looking arcs of black rock would collapse under our feet. The air was thick with sulfur and heat was blasting from the burning trees and emanating from the hot ground, moving in silent waves over the barren field of black rock. The lava sounded crunchy under our feet as if we were walking over thin shards of broken glass. Shiny black slivers popped and cracked with each step, only adding to our growing feeling of apprehension. The edge of flow with its fiery glow and crooked line of smoke was 50 yards away from the end of the forest. The walk was slow, and each step seemed a little more difficult than the last, and as we moved closer to the flowing lava, the heat became almost unbearable.

I wipe my face and get a palm-full of sweat that evaporates before I can even dry my hand on my jeans. I look back at Meg – she’s made it to the forest, relatively safe. At least she’s not on fire. The lady who was walking away from the group has been reined in by one of the guides. That leaves five of us left on the lava – Jess, me, two other tourists, and one guide. I take a couple of steps towards a mound a few feet in front of Jess and myself. I feel Jess’s grip tighten.

The mound is a fissure where the lava that’s flowing underneath us has found a way to surface. The molten rock is oozing out of the ground in slowly expanding bright red circles that quickly become skinned with black scales as they cool. One of the other tourists is poking at the lava with a five-foot-long stick as if he’s standing in front of a campfire.

I shake my head and focus my eyes on the ground in front of my feet. “Oh my god. This is terrifying,” I say. There’s a crack – two inches wide and two-feet long. When I gaze closer into the crack, I can actually see flowing lava six inches below the ground. I squat and place my palm over the crack and immediately pull it away from the stabbing heat.

I stand and try to focus back on the bubbling mound, but my eyes are blurry, and my head feels heavy and loose as if it wants to pull me to the ground. I can’t help but imagine if one of us tripped. If that guy in front us – now holding his stick up with a glob of lava dripping off the end – tripped, he would fall into lava.

“This is way too dangerous,” I say.

Luckily, the guide seems to have the same opinion. He motions to the other two tourists to follow him and walks back towards us.

“One long hike back,” he says with a slight pidgin accent. He pauses and opens his arms wide and smiles. “But, Madame Pele, she lolo, eh?”

I smile and Jess shakes her head.

“I think we’re the lolo ones,” she says.

The hike back is grueling. It’s mid-afternoon and the forest is steaming. My thighs feel like jelly and my knees are threatening to give out on every chunky root that almost sends me face first to the ground. No one had brought enough water – it was all gone after the walk over the lava field. There’s minimal conversation, only the grunts and heaves of sheer determination. We finally make it back to the ‘trailhead’. It takes another 45 minutes for our shuttle to arrive, but we’re all too exhausted to care.

Although this tour is no longer available for obvious reasons, and it may have been one of the more careless adventures I’ve had, I cherish the memories. Nothing has made me more aware of my own mortality. When I recall staring into flowing lava, I now understand that for a brief moment, I was empty and complete at the same time. It’s the fear of death, released. On the ride home, we make a pit stop to watch the sunset from the summit of Mauna Kea, the tallest mountain on the island. At over 13,000 feet, the air is cold and thin. The change in temperature is welcome as we all have a new respect for heat. There’s a light dusting of snow, and we shuffle around for a few minutes and watch the sun slip behind the west coast. Before we leave, I absorb one last view of the glowing orange horizon. My mind is in a place of meditative calm, processing the day’s adventure, and I realize just how remarkable it is that we witnessed the creation of new land.