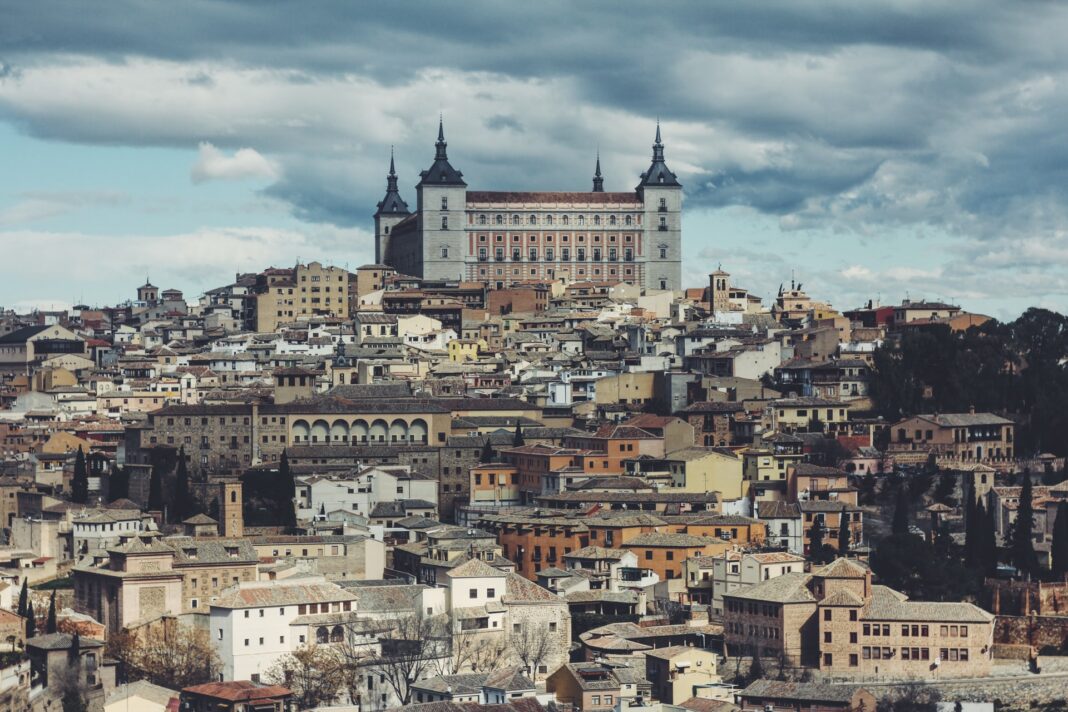 The ancient city of Toledo, Spain is known for having a beautiful mix of Christian, Jewish, and Muslim influences. It is nicknamed both “The City of Three Cultures” and “The Imperial City” as it was once the court of Charles V of the Holy Roman Empire. It sits on a hill surrounded by an ancient medieval wall and the Tagus River.

Just an hour away from Madrid, traveling to Toledo makes for a perfect day trip! Upon your visit, you will most likely arrive on the walled side of the old town. Take the steep staircase or escalator up and marvel at the view of the surrounding area. Up top, you will be greeted by narrow cobblestone streets which you will want to wander around and get lost in.

Several cafes and restaurants can be found around town, but, if you are like most people, you have come for the rich religious history. Toledo was declared a UNESCO World Heritage Site in 1986 due to its monuments and cultural heritage encompassing Christian, Jewish, and Muslim influences. This makes it one of the most important cities to visit on the Iberian peninsula.

So, what exactly is there to see in Toledo? Here are a few noteworthy places to stop and learn about what makes this Imperial City so special.

This historic Christian church was founded in the early 11th century, although the main purpose for a visit here is to see artist El Greco’s illustrious painting “The Burial of the Count of Orgaz” (1586). El Greco was a Greek artist (hence his name, meaning “The Greek”) of the Spanish Renaissance era in the 15th and 16th centuries. This priceless work of art is so ornate and detailed that you could spend hours looking at it and discover something new! Photos are not allowed of the painting, but if you are curious to know what this masterpiece looks like, there are plenty online. (There is also a picture of it hanging up outside the room it is housed in).

Located in Toledo’s Jewish Quarter, the perplexing name of “Synagogue of Saint Mary the White”, is one of three medieval synagogues that remain in Spain after the expulsion of the Jews. It was originally named Ibn Sushan Synagogue when it was built in the 11th century in Moorish-style construction. In 1391, it was taken over and renamed by the Catholic Church under which it remains today. Inside, horseshoe arches over columns are prominent throughout the space. The arches rest upon capitals that are intricately detailed with pinecones and other vegetation and are painted a bright white. The floor tiling is quite lovely as well and you will leave impressed by the stunning architecture of what’s considered the oldest synagogue in Europe.

This former mosque was built around the turn of the 10th century and is one of ten mosques that existed during the Moorish period when Toledo had an area known as Medina. Since the building is small, it won’t take too long to tour it. This mosque is definitely worth a visit to view the rich Moorish architecture. A day trip to Toledo is a must especially if you are traveling between Madrid and Granada. It is a memorable place with a rich history spanning over a thousand years. Before you leave, take a walk down the hill and exit a gate leading outside the walls of the city. Cross one of the bridges over the Tagus River, look back, and marvel at the city of Toledo up on the hill while imagining what life was like long ago.

You will be glad you did!