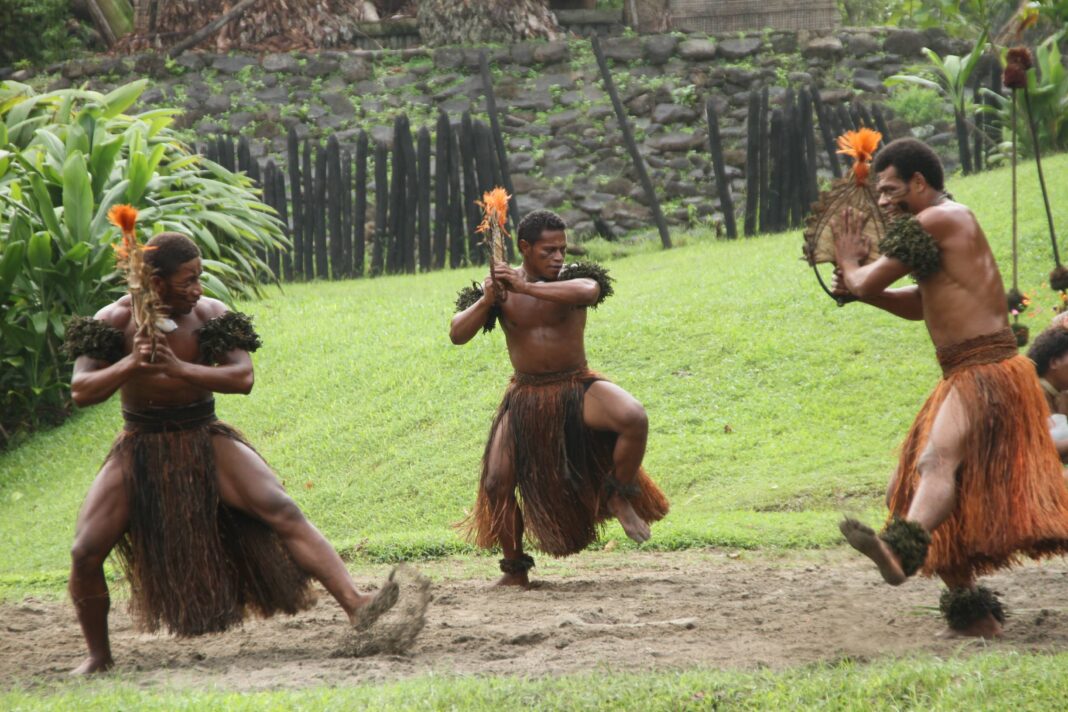 The Republic of Fiji consists of 333 islands situated north of New Zealand and in the heart of the tropical South Pacific Ocean.  One hundred of these islands are permanently inhabited. Fiji has been described as the “soft coral capital of the world,” providing for some great underwater adventures and marine life.  Fiji is not one of those tropical paradises that people rush to visit due to distance, cost, and limited accommodations, but it is a once in a lifetime experience. To the lucky visitors, Fiji simply means “Paradise” and how right they are!

Viti Levu is the largest island and where the capital city of Savu is situated. The island’s name means “Great Fiji.”  It is the most populated of all the Fijian islands.  Not to be outdone, the sister island of Vanua Levu, meaning, “Great Land,” is Fiji’s second-largest island and only a 55-minute flight away. Both islands provide visitors with extreme activities, island beauty, and a simple way of life that is unparalleled. Depending on which part of the world one lives, it’s a long haul to get to their main airport in Nadi on Viti Levu.  The first word one hears upon arrival is “BULA” meaning “hello” or welcome and the Fijians say it every chance they get.

The island is made-up of villages. Although the villagers live a very simple way of life and have very little in terms of modern amenities, they open their homes to invited guests (one needs to be invited to visit a village). The village chief must grant permission for any visitor to enter his village, if permission is granted, it is customary for the guest to bring a gift, a “kava root” (found in every market-cost is about $10-$15 US). Do not arrive empty handed-this is a sign of disrespect.

The kava root is presented to the chief at his home. A ritual called a sevusevu (pronounced:  Sav-u-sav-u), or welcoming ceremony is performed, which is basically to appease both the chief and the villagers to welcome you.  This ceremony is conducted in Fijian. At the start of the ceremony, an appointed individual(s) make a ceremonial kava drink by pounding the kava root into powder, placing it in a cloth, and continually dipping it in a large bowl of water.  This is like dipping a large tea bag until the water turns a muddy brown color, then it is ready for everyone to drink.  Served in a coconut shell, the chief takes the first drink and then the honored guest(s) follow.  Drinking the kava will make your tongue tingly.  There really isn’t much taste to the kava, once you get over its brown muddy color.

Many traditional customs are observed at the kava ceremony, the most important (next to the gift) is that visitors must wear a sulu (a traditional wrap/sarong), cover the shoulders and take shoes off before entering the chief’s home.  Too much to remember, don’t worry, all the resorts organize visits to local villages and they will educate you on the proper etiquette and protocal.

The most adrenaline charged activity that one can do is scuba diving near Beqa island (pronounced; Benga) just off the southern coast of Viti Levu.  If you want to get really up close to the ocean’s most feared creature, sharks, this is it. These are not the little boys, rather the big ones, which include the bull, reef, nurse sharks and the biggest of them all, the tiger sharks.  This dive is conducted without the safety of a cage for protection.

I had the opportunity to go on a dive with Aqua-Trek Beqa Diving, located on the premises of the elegant Pearl South Pacific Resort (south coast).  The crew provided a dive briefing and throw in a few shark tales meant to scare the group, but it didn’t work. I jumped in with the group and descended to 60 feet.  After a little swim we came to a rope, grabbed it and rested on our knees.  As soon as we settled ourselves, the sharks appeared (Bull sharks), lots of them.  The dive masters had bins with tuna parts in them and the sharks knew that it was feeding time.  The sharks got so close that that we could touch them (but don’t).  During this feeding frenzy, a female tiger shark appeared right in front of us, it was about 15 feet long.  As soon as the tiger shark appeared, all the other sharks disappeared.  Talk about adrenaline and heavy breathing.  It was unbelievable as she whisked slowly and gracefully ever so close around our group and just above our heads.  The Tiger shark rules the territory over the other sharks, it’s the biggest and most vicious shark, the top of the food chain.  This one was only curios and left us just as fast…she was not hungry!

Another thrilling experience is zip-lining (Zip Fiji).  This may not sound as thrilling as the shark dive and feeding, but it really is.  Imagine the rush of getting harnessed-up, soaring through the Fijian jungle, gliding over a river and seeing wildlife at eye level as you zip across the rain forest 75 to 100 feet in the air?  These zip-lines are anywhere from 45 feet to 700 feet in length and guarantee a thrilling fast ride.  One of the best experiences is seeing the staff “hot-dog it.”  They ride the lines upside-down, they put on a great show.

If you like water, spend the day kayaking the Wainikoriiluva River (known as the Luva River), it’s unforgettable.  The Luva River winds past friendly villages, lush canyons, refreshing waterfalls and fast rapids. Even the most novice individual can maneuver these inflatable kayaks through the rolling waves of the class II whitewater and rock mazes. This required the permission of the local chief and a kava ceremony.

A short 40-minute flight north of Viti Levu will get you to the sister island of Vanau Levu and a new set of experiences.  This island is much more laid back.  One of the must-see locations is Nukubati Island (pronounced:  Nook-oom-bah-tee) just off the west coast.  It is a private island surrounded by an ecological paradise. I was fortunate to be taken by the staff of the resort on a food-gathering trip for an evening feast. I learned that when the tide recedes, the water is shallow exposing the reefs and that is when the food is gathered. Here I was taught to spearfish and even caught an Octopus for our dinner.  Fijians only catch what they can eat, so the food is fresh every day.  While walking on a reef in knee-high water I saw something I never thought existed, a blue starfish. They are easy to handle and seem fake, but they are real and make for a great photo opportunity.  As the tide began to rise again, we made our way back to Nukubati where the food was going to be cooked in the traditional way.  Large rocks in a fire pit were heated until white-hot, all the fish were placed on them (much like a bar-b-que) and were grilled just right.  Palm leaves placed on the ground so when the sun went down and the feast began.  The resort staff (about 30) and guests sit around the palm leaves and dine together under the ambiance of the moonlight reflecting on the water and torches surrounding the area of the dinner party.

Nukubati is a luxurious resort without any televisions or telephones (yes, they do have internet), an amazing staff who love their job and only 7 seaside bures (a wood & straw hut, really a cabin). The maximum capacity is 14 guests, talk about being on your own island paradise!

On the east coast overlooking the peaceful waters of Savusavu Bay is the Jean-Michel Cousteau Resort. This resort has been named the World’s best resort hotel for scuba diving and the number one eco-resort worldwide.  The resort carries the name of a very famous oceanographer (he is the son of the iconic ocean explorer Jacques Cousteau). Just a 40-minute boat ride off of the resort is what the resort staff are happy to tell all scuba diving guests is their pride and joy, the Chimneys dive site.  Rated as one of the top 10 dives in the world and a favorite of Jean-Michel Cousteau.  If it’s his favorite, it was good enough for me too!

As soon as I jumped in, I knew why it was called The Chimneys.  There were two gigantic reef stacks (in the shape of chimneys) towering from the ocean floor to just about 10 feet from the surface.  The colors, plant and aquatic life were very vibrant.  My dive buddy and I spiraled our way around the Chimneys and descended down to the bottom (about 75 feet), swam across to the other chimney and ascended in the same spiral motion to the surface.   There were so many large schools of small fish swimming around us that I really felt I was in a Nemo movie, what a change from the shark dive.

Fijians have the reputation of being known as the friendliest people in the world. A walk around the villages, the markets or your resort, you will get greeted with the word “BULA.”  Return the greeting whenever and wherever you are, it shows you care.  Let me leave you with a few tips to keep in mind if you visit Fiji so you will “Know Before You Go;”

• Learn a few Fijian words to honor the villagers and people you meet;

• Never touch a Fijian’s head, especially the chief of a village, as the head is considered sacred and touching the head, even in teasing, is disrespectful.

• The Kava Root is not for everyone, but everyone must take a drink during the sevusevu ceremony.  Listen to the server, he will ask if you want a “High-tide” meaning a full shell of kava, or “Half-tide” meaning a half shell. Three claps of the hand after you finish the drink signals respectfully that you do not want anymore.

• Water at the resorts is usually fine to drink, but be safe and drink bottled water. For Your Information-The villagers use boiled water at the kava ceremony for the tourist visitors.