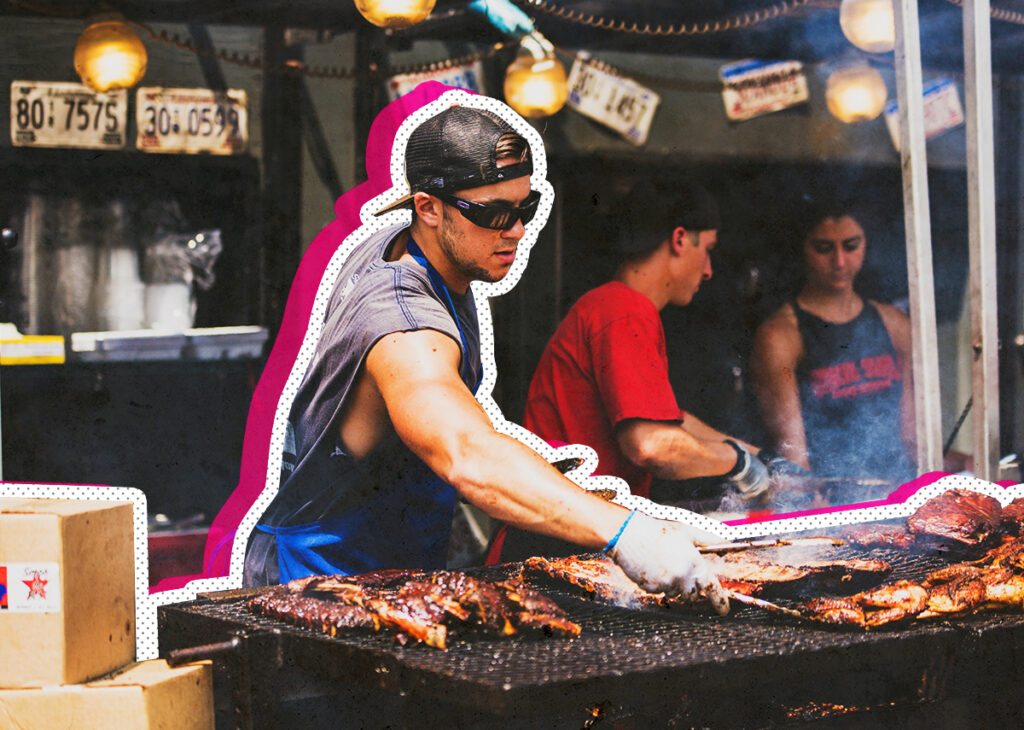 Austin has been known as a major food city for several years now. In 2017, Austin was ranked the second most exciting food city in America. And in 2019, it ranked in the top ten food cities in the United States. Clearly, this thriving Texas city has had a long-standing reputation for fantastic restaurants. If you have an upcoming trip to Austin, Texas, we have the top seven most delicious restaurants you should check out.

Franklin Barbecue is so renowned for its amazing food that it shows up in just about any article about Austin restaurants. If you come to Austin, you have to have barbecue. And if your trip only gives you enough time for one barbeque spot, any local will tell you to go to Franklin Barbecue.

Aaron and Stacy Franklin run Franklin Barbeque and the spot has garnered international attention. People show up by 7:30 am to line up for four hours for brisket from Franklin and the food is usually sold out before the afternoon. The restaurant has become so popular that it’s been visited by celebrities like Jimmy Kimmel, Anthony Bourdain, and President Obama.

After standing in line for so long, our best advice is to try a little bit of everything on the menu!

Little Ola’s Biscuits (Olamaie) serves some of the best, authentic Southern comfort food in all of Austin. You can tell every dish is made up of fresh ingredients, from the house-made potato chips to the homemade spiced-apple butter. And a trip to Olamaie’s wouldn’t be complete without some “secret menu” biscuits that gave this restaurant its notoriety. Order the spicy fried chicken sandwich while you’re at Olamaie’s and take a few fresh biscuits home with you – you won’t regret it!

You can’t spend time in Texas without getting authentic, delicious Mexican food. And one thing most locals in Austin can agree on is that the best tacos are from Veracruz All Natural. While all their tacos are amazing, this restaurant is most known for its breakfast tacos, so make sure to order at least one of those!

Veracruz All Natural started in 2008 as a food truck run by two sisters. After many years of success, the sisters managed to expand their operations to include six locations, a mix of brick-and-mortar and food trucks across all of Austin.

You can come to Veracruz All Natural for handmade corn-and-flour tortillas, fresh salsa, and authentic Mexican flavors. Just be prepared to wait in line, because this restaurant is popular with everyone – locals and tourists.

Emmer and Rye promise to deliver an unbelievable dining experience. The menu includes everything thriving in Central Texas. They mill their own grains, and even do their own whole-animal butchery – so care and attention is put into every bite. Remember: the more people you can come here with, the more plates you can try!

Emmer and Rye have a strong focus on serving only seasonal food, which means the menu can change daily. The only thing that remains consistent is their famous “Cacio e Pepe,” which you absolutely have to try!

It might surprise a lot of people to find out that Austin has a thriving vegan community. In fact, it was named the seventh most vegan-friendly city in the United States in 2018. Whether you stick to a plant-based diet or not, Counter Culture is going to shock you with its flavorful menu.

Opened in 2008 and women-owned, this restaurant is out to break the misconception that vegan food must equal healthy food. We love Counter Culture for rich, indulgent food like the Buffalo Mac and Cheeze Balls, the Apple Bacun Sandwich, and the Tiramisu Cashew Cheesecake. This vegan food will blow your mind!

You don’t necessarily hear Austin and think of Japanese food, but Kemuri Tatsu-ya is here to prove you wrong. This restaurant blends Japanese cuisine and classic Texas barbecue in a way that just makes sense.

Come to this fusion restaurant with an appetite because you’re going to want to try just about everything on the menu. We highly recommend the BBQ tsukemen ramen, some Japanese whiskey, and at least one vegetable dish to round the whole experience out.

If you love Kemuri Tatsu-ya, check out the other restaurant that co-owners Chef Tatsu Aikawa and Takuya Matsumoto own called Ramen Tatsu-ya.

Austin’s top pizza spot hands-down goes to Buffalina – the chic restaurant serving Neapolitan pies. Not only is Buffalina recognized for its phenomenal cuisine, but it also continuously wins awards for its astounding wine menu.

We love coming here with a large group so you can share a bit of everything. The wood-burning oven pizzas can almost transport you to Italy. Our perfect meal includes the anchovy pizza, the spiced lamb pizza, and the fresh burrata.

If there is one thing Austin, Texas can deliver on, it’s incredible food. Make sure you try at least two or three of the restaurants on this list for a truly perfect Austin vacation, or for your next trip to SXSW. And if you choose to leave the Austin area, check out our food recommendations for Houston and Dallas!