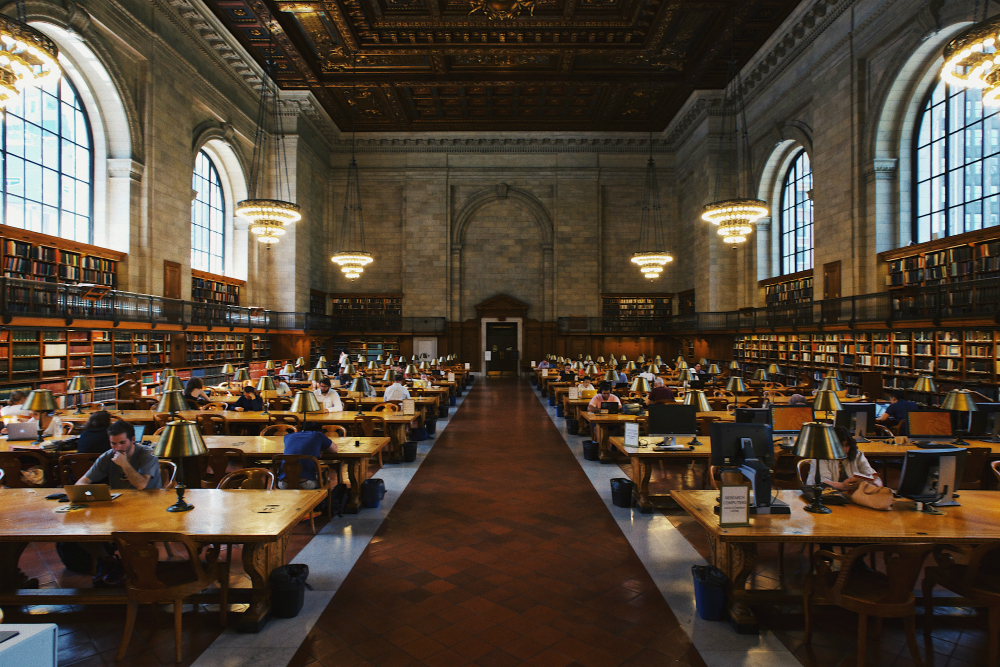 Typically, readers travel to different places in the books they read. From Hogwarts to the Himalayas, a book can transport you to a different time, place, or even dimension. It’s for this exact reason that avid readers are often avid travelers. Head to a beach in Fiji or a Ski Chalet in Switzerland, and you’re likely to find a tourist with his or her head in a book. Escaping the nine to five comes in all shapes and sizes, whether it be in the written word or through traveling the globe.

Second in size only to the Library of Congress, the New York Public Library system is gargantuan. With over 53 million items at its 92 locations, no matter where you are in New York, you’re close to a branch. Book lovers will fall hard for the Stephen A. Schwarzman Building, commonly refferred to as the “Main Branch”. It’s hard to miss the two lions that guard the entrance (Patience and Fortitude). The national landmark is home to over 2.5 million books.

In our opinion, Powell’s is the best book store in America. It’s a chain of five stores, but you’re going to want to head to the main location when you’re in town. Located in downtown Portland, Powell’s City of Books is the largest independently owned new and used bookstore in the world. The sheer number of used books mixed with the friendly (and brilliant) staff at Powell’s is what makes this such a great experience. Don’t miss a chance to visit.

Thinking of touring the Pacific Northwest? Check out this itinerary from Maupintour.

Right behind the New York Public Library in terms of book volume, The Boston Public Library is the third-largest public library system in the USA. The research collection includes over 1.7 million rare books and manuscripts, including early editions of Shakespeare, the personal library of John Adams, and papers that belonged to William Lloyd Garrison. It’s an absolute treasure trove of important documents, and history lovers will delight in its contents.

The Boston Central Library is the location to visit if you’re short on time. It’s located in Copely Square, and the reading room in the McKim building is not to be missed.

4. The Ernest Hemingway Home and Museum

Not only is the home and museum of Ernest Hemingway a historical treasure, it’s also located in one of the coolest towns in America. Key West is home to hippies, beach lovers, and all sorts of cool folks. It’s worth a trip in itself, but when you visit you’ll need to be sure to visit the Hemingway House. Hemingway lived in the home from 1931-1939 (though he owned it until his death), writing stories including The Snows of Kilimanjaro and To Have and Have Not. It’s a living tribute to the quintessential American novelist.

For our last place to visit, it’s time to head to the midwest. The American Writers Museum in Chicago opened recently in 2017, inspired by the Dublin Writers Museum in Ireland. Learn about Orson Welles, E.B. White, Edgar Allen Poe, and plenty of other famous American writers in their featured exhibits.

Don’t miss the Bob Dylan section. It’s a beautiful tribute to his genius.