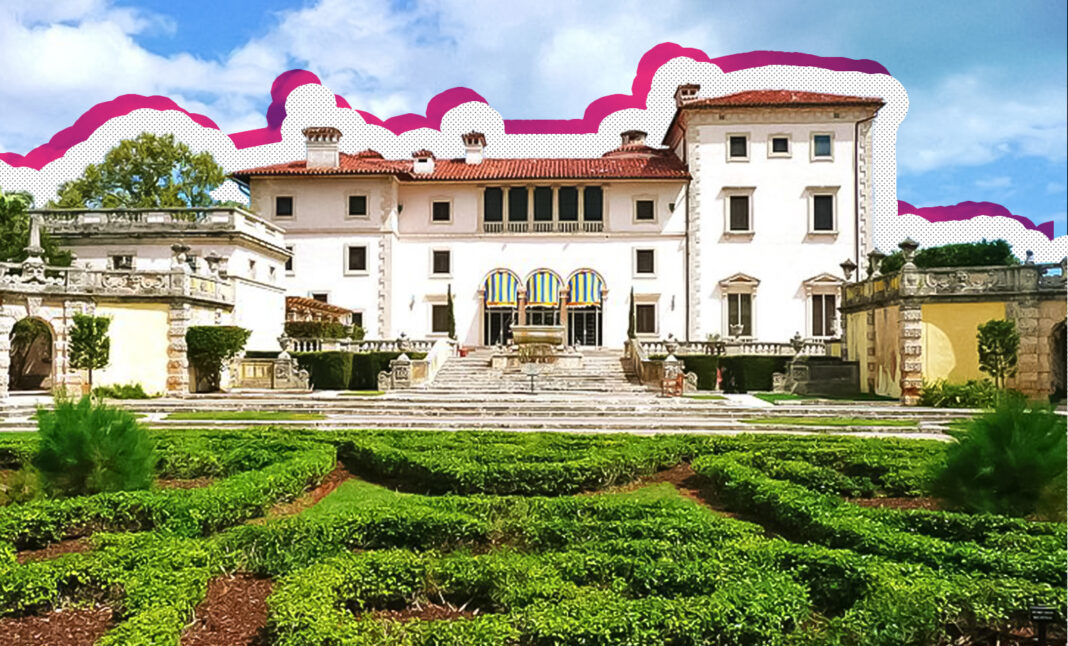 Every year thousands of people travel to Miami, whether they are spring breakers hanging out in South Beach or Snow Birds escaping to the tropical weather for the winter. Not many visitors know that in Miami, there are several monumental sites of the past worth exploring.  Some of these can be found in plain sight, and some just off the hidden path.

Here are three must-see historic sites you should check out in Miami.

James Deering built Vizcaya Museum and Garden, located in the Coconut Grove neighborhood of Miami in the early 1900s. Deering was a businessman involved in his father’s company and needed a place to get away from the cold winter weathers of Chicago. He found Miami to be the perfect place to build his winter home.

Once at the museum and garden, you will be able to explore the house’s different rooms, such as the dining room, the library, bedrooms, and more. You will also notice that the Vizcaya Museum has a renaissance flair – Deering would often visit Europe to get inspiration for building his house.

Just out the back door, views of the ocean and docks where the boats come in will take your breath away. Currently sitting in the boat dock is The Barge, two halves of a ship made from stone.  Not only did Deering take consideration of how the house looked but also how the outdoors looked.  Just around the corner from the docks is the garden. The garden is filled with vegetation, Italian sculptures, and numerous water fountains.

Next, we have the Coral Castle Museum. This open-air museum or rock garden as some may call it is located in the Homestead area of Miami. Here you will notice everything is carved from stone – yes, everything. The beds, bathrooms, chairs, and dining tables are all stone. It took Edward Leedskalnin, the former owner, 28 years to build it.

Once on-site, you can tour the area by yourself or follow the tour guides to give you more on the history associated with the garden.

After building the Coral Castle, Leedskalnin opened it to the public and would charge visitors a 10 cent entry fee. An original piece of rock with an engraving of the cover charge still stands at the entrance today. Back then, he called it Rock Gate Park. There is a picture of him in the tool room and some of the tools he used to build the museum.

Sounds familiar? That is because I mentioned James Deering above during the overview of the Vizcaya. Deering Estate, however, was owned by the brother of James, Charles Deering. Like his brother, he wanted to escape the cold weathers of Chicago during the winter and made the Deering Estate his winter home.

Though both Mediterranean styles, the Vizcaya and the Deering Estate homes are quite different, you will notice that the houses on the Deering Estate are much smaller than the Vizcaya home. The first house at the Deering Estate, the Richmond House, was built in 1896 and was one of the first hotels in the area. After closing in 1915, it was bought by Charles Deering, who had it renovated and turned into his home. Later on, other buildings such as the pump house, carriage house, powerhouse, and the Stone House were added.

The Deering Estate does not have a garden; however, it is home to some captivating landscape. After entering those wide wooden gates and looking around, you will mostly notice a variety of trees, but once you get past all of that and move on to the back of the Stone and Richmond Houses, you will be able to see what I am talking about.  Here you can observe the sight of the towering palm trees, well-manicured grass, and the spectacular view of the waters of Biscayne Bay. If you go more closely and peek into the glistening waters, you will see fish and crabs.

Apart from touring the houses on-site and hiking the trails, at the Deering estate you can also take your family out for a nice picnic, go kayaking, canoeing, or take part in the many on-site activities.

If you are ever in Miami and looking for places to explore, add these to your list and be prepared to step back in time.