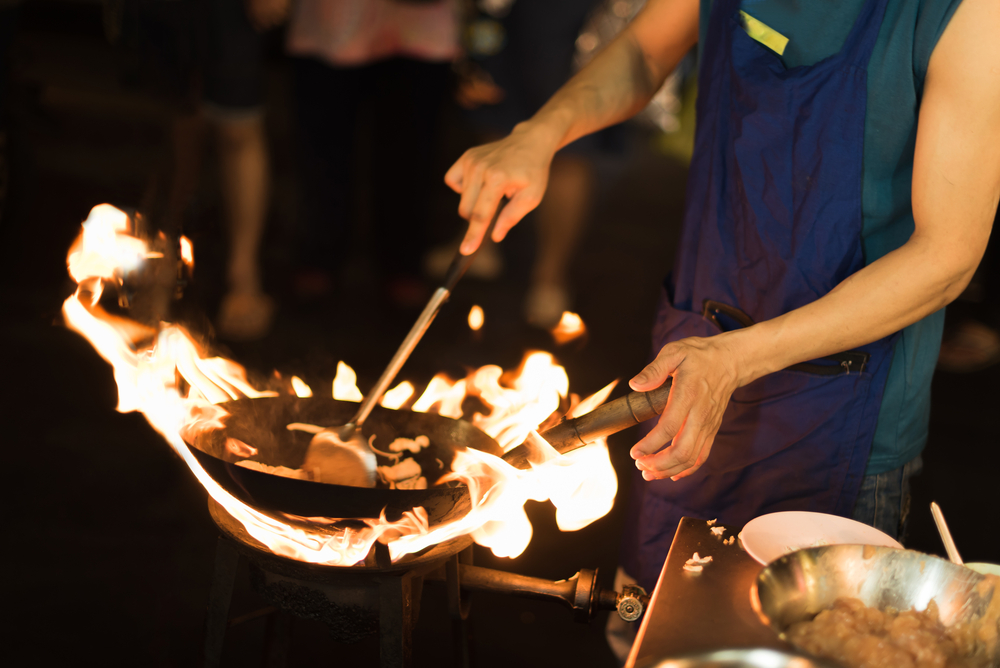 These are the 15 most shocking foods you can eat around the world.

Scroll to the end of the article to see our bonus food item – it’s the most intimidating item on this list by far.

WARNING: If you have a weak stomach, this post is not for you.

There is an entire world of pungent, shocking and just plain bone-chilling foods out there to sample. And while many of the world’s strangest foods arouse comparisons to the chilled monkey brains in Indiana Jones and the Temple of Doom, national dishes aren’t meant to scare away outsiders. On the contrary, in the world’s esoteric, hidden avenues of gastronomy, native and ethnic groups proudly express themselves through flavor.

That’s not to say this list isn’t full of stupefying and sometimes downright distressing fare, but who knows. Maybe after reading this list, you’ll agree — one man’s trash is another man’s treasure.

In no particular order, here we go…

As far as euphemisms go, this one takes the cake: Shirako in Japanese literally means “white children” and wouldn’t you know, refers to the sperm sacs of either cod, anglerfish or puffer fish. These white blobs of goo are said to have a sweet custardy taste.

The nose isn’t exactly a choice cut, and it looks as bad as it sounds. The intrepid Canadians ignored the norm and decided to explore nasal gastronomy. The nose is boiled with some onions and spices, the hair is removed, then the cut is sliced and covered with a broth that sets into a jelly.

Sardinia’s casu marzu, known as “rotten cheese” is made from Pecorino (a hard cheese made from ewe’s milk) that has gone bad – and we’re talking really bad. The larvae of cheese flies (piophila casei) are then added to the stale cheese. They hatch inside, burrow around and ultimately digest the fats. You can eat this tongue-burning delicacy with or without the maggots, which apparently enhance the flavor. But consumers beware: These maggots jump when they panic and can even survive the stomach and settle into your intestines. 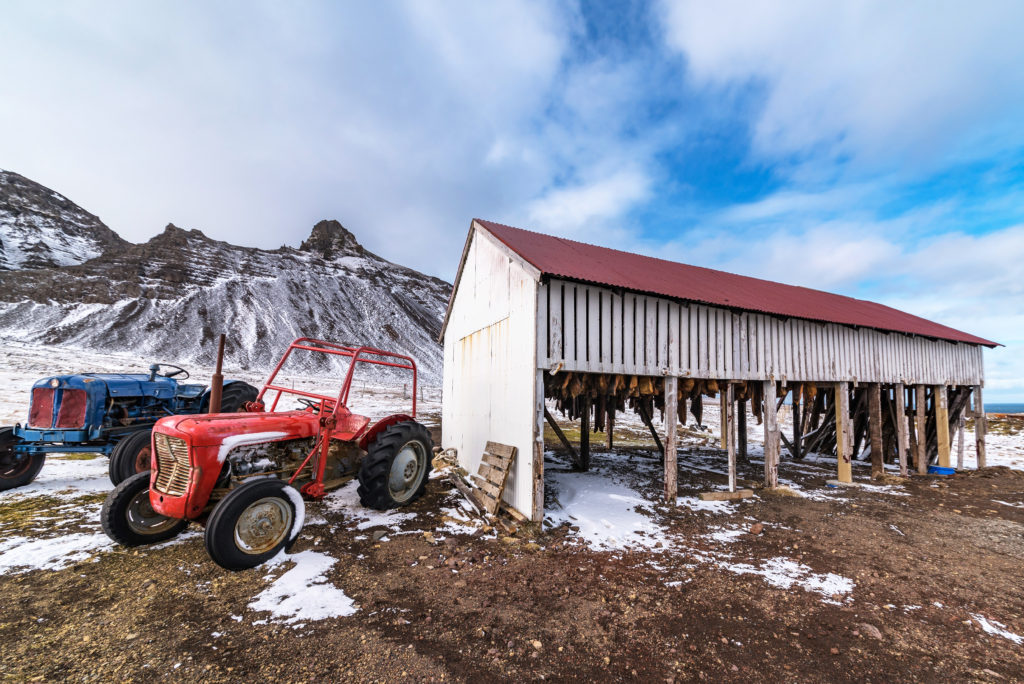 How anyone conceived this recipe is a mystery. To prepare is simple: Gut and behead a Greenland shark. Place said headless shark in a shallow grave and cover with sand and stones so its poisonous internal fluids can drain. (Be careful, as fresh shark can actually kill you.) Leave the carcass to rot for two to three months, then cut into strips and dry for several more months before serving.

Anthony Bourdain has famously described this dish as “the single worst, most disgusting and terrible tasting thing” he’d ever tried. Follow with a shot of Icelandic vodka.

A common dish in both Japan and China, these eyeballs can be found in most grocery stores for about $1 USD, which is probably $1 overpriced. Eye of the tuna is rather tame and compares in taste to squid or octopus. Boil before eating or enjoy raw and top with your choice of seasoning. We prefer sriracha.

Think chocolate chip cookies, only instead of chocolate chips, you get wasps. The biscuit also just happens to contain the digger wasp and is known to have a pretty mean sting. We wish you the best of luck! 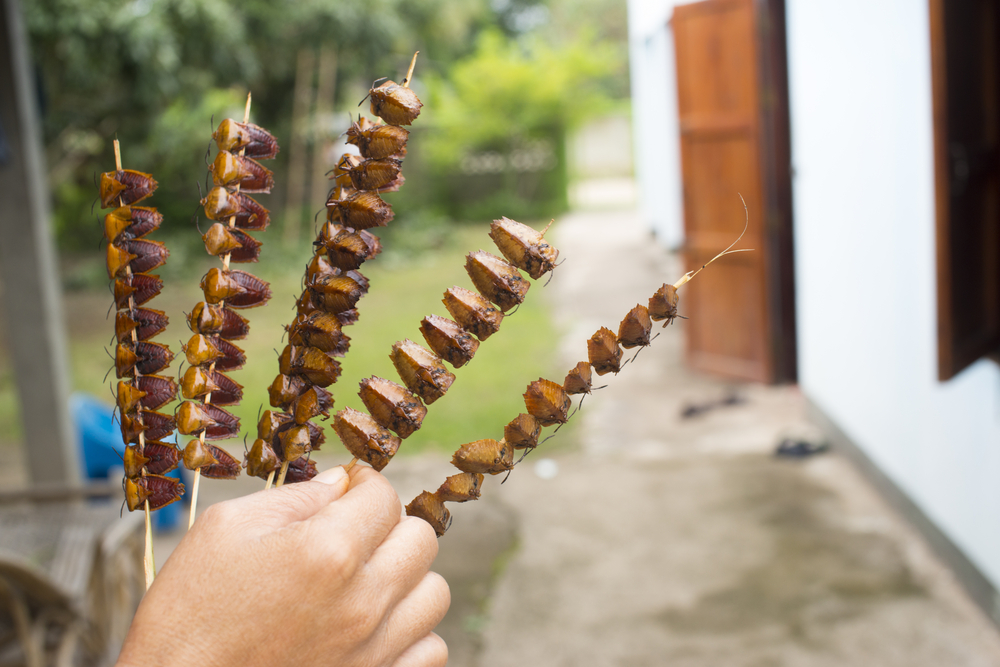 Botswana, Mozambique, Zimbabwe, Venda, Zambia AND South Africa use stinks bugs to flavor stews and even eat them à la carte. As you could probably guess by its name, the stink bug is — well, stinky. It’s known for emitting a foul odor as a defense mechanism to prevent being eaten by birds and lizards, and humans are no exception so bring your tissues! This dish is pretty eye-watering.

This rubbery tasting Asian fare is not only a delicacy but a medical brew believed to aid digestion, build up the immune system and, perhaps the biggest selling point, increase libido. The soup is made from the nest of the swiftlet bird, who builds it out of its own viscid saliva. These nests are contrived high up on the faces of cliffs, making harvesting them extremely dangerous and many people die each year doing so. Is this dish worth the human sacrifice? You tell us! 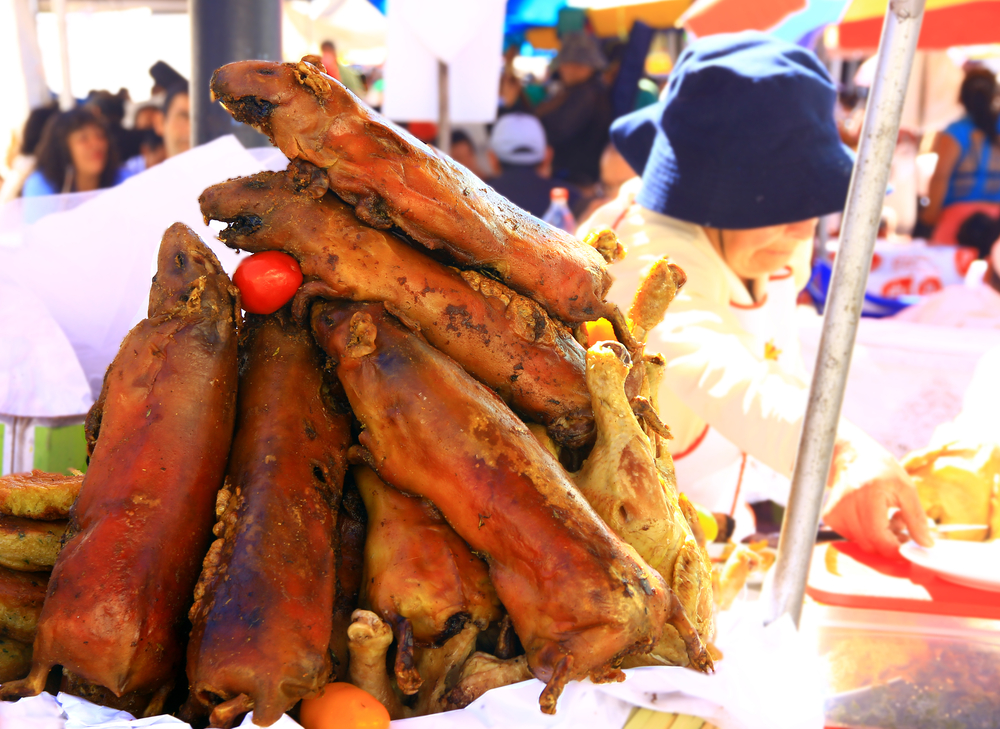 A controversial dish to some, a necessity for some regions in South America. The domestic guinea pig has been a great source of food for thousands of years in the Andes. Farmers keep them as they do chickens, and we hear they taste like chicken too!

WARNING: It will be served looking exactly like your childhood pet. 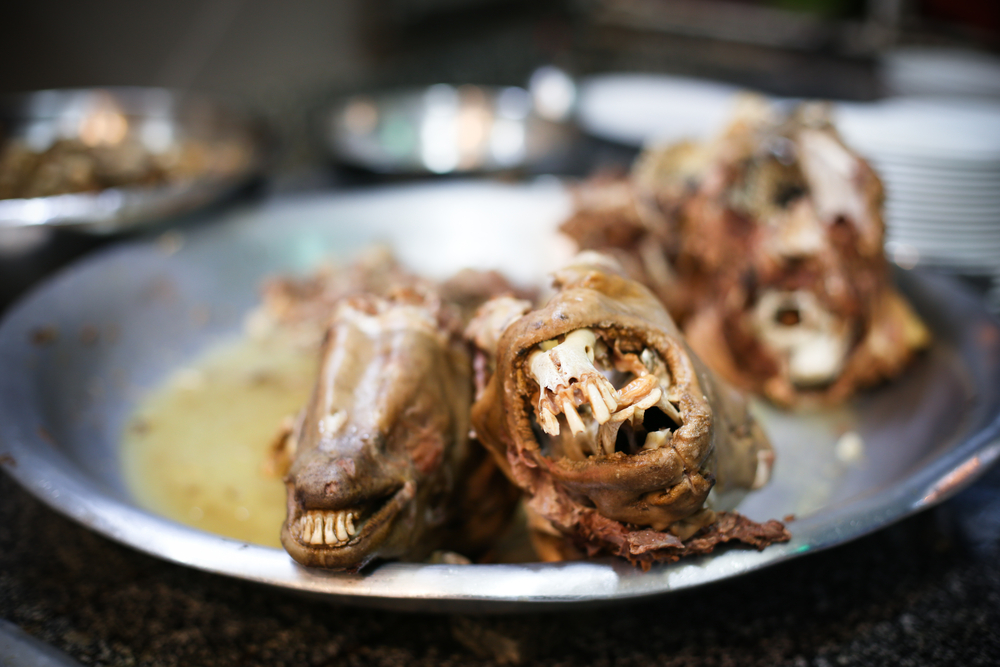 Once a winter comfort food, Khash is now considered a delicacy throughout the Middle East, Eastern Europe and Turkey. The Farsi name of this dish literally translates to “head and hoof,” and that’s exactly what you’ll find in this stew. While the main ingredient is cow feet, the skull plays a big part, so be sure to smile back when you greet your plate.

Drunken shrimp are served both living and drunk, stunned in a strong liquor called baijiu. It is recommended to bite the head off first before consuming the body. This popular Chinese dish also puts diners at a severe risk for paragonimiasis (yes, parasites!), so proceed with caution. Honestly, just in case we haven’t made it clear enough yet, proceed with caution with every item on this list.

To say that sannakji is served raw would be an understatement. When we say raw, we mean raw as in a chef comes to your table and dismembers a small octopus right in front of your eyes. The tentacle pieces are prepared with sesame oil, if the chef can hit them that is, because they are actually still writhing around on the plate as you reach for your chopsticks.

The wiggling tentacles have been known to get revenge and choke the consumer, though, so maybe wait until you don’t see quite as much movement before shoveling it into your mouth. 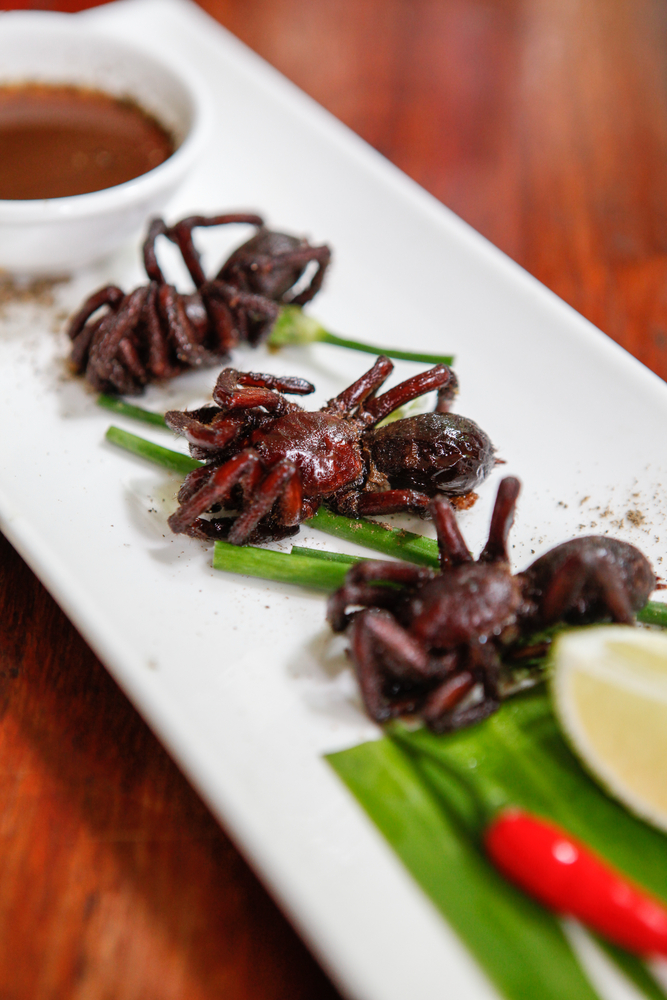 Fried tarantula first became popular during the food shortages under the Khmer Rouge regime but it is now considered a delicacy in Cambodia. Cambodians eat them like candy and apparently these critters have much more protein than a grasshopper, if you’re ever in a position where you’re deciding between the two. These tarantulas also have brown sludge in their abdomen, which consists of mainly eggs and excrement. Yum!

Also known as “Dragon in the Flame of Desire” this dish is believed by the Chinese to be good for your health, much like spinach. This penis is generally roasted and plated elaborately to impress. Size matters here, folks!

15. The Beating Heart of a Cobra Snake – Vietnam 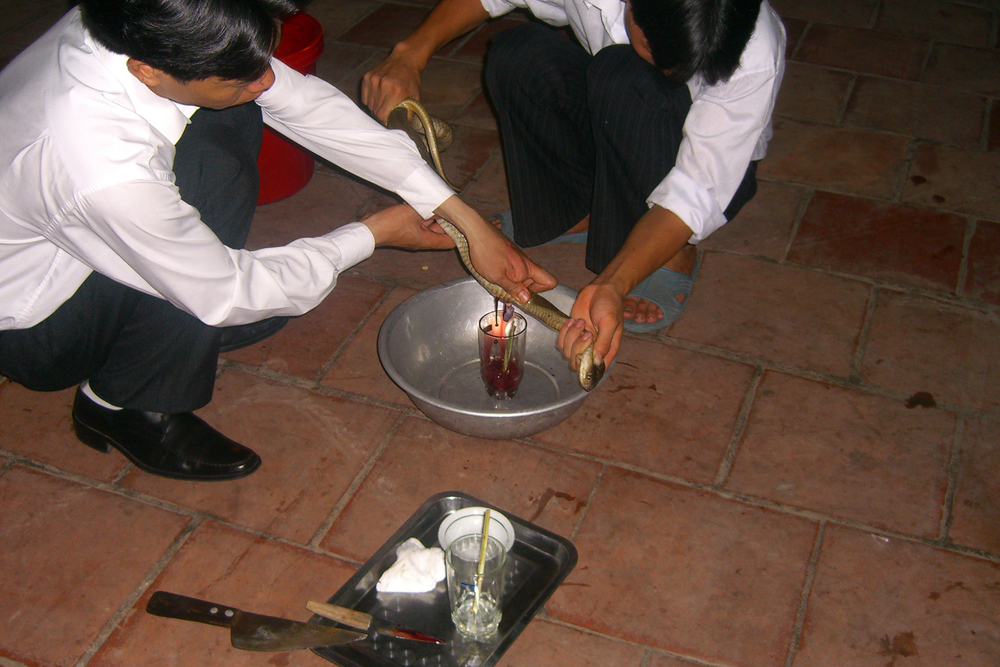 “Eat your heart out,” they said.

This is quite literally what you do in Vietnam when you opt for this delicacy. Consumption of the cobra’s live heart allegedly provides superhuman vitality, making for an increasingly popular pursuit. The chef will slit into the struggling snake right in front of you and pour its literal beating heart into a shot glass of its own blood. You sink it down while its still pumping, much like you did in college. Cheers!

Deep fried until khaki-brown, slathered in “tartar sauce”, and served on a bun straight out of the microwave, the Filet-O-Fish is not for the faint of heart. It’s tradition to wash the mistake down with a Diet Coke to let the aspartame and other undisclosed chemicals eat away at any of the remnants-o-fish. Plus, fewer calories! 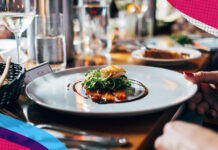 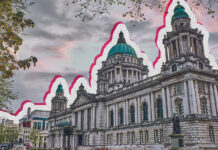