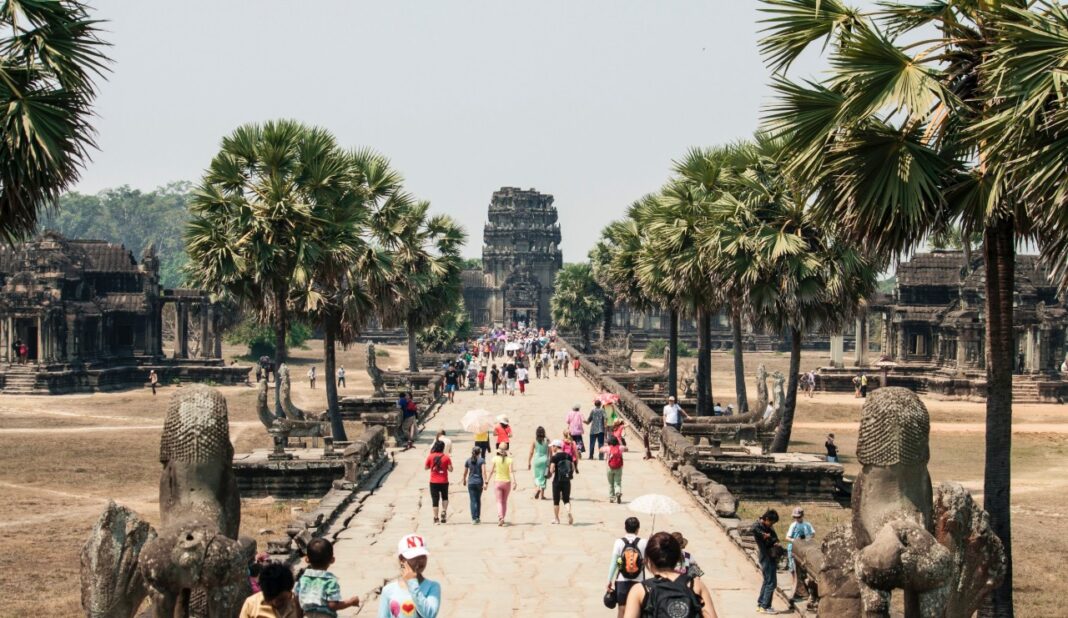 Cambodia is a country with a long history and an endless number of natural wonders. Think ancient temples, beautiful coastlines, delicious cuisine, and some of the friendliest locals you will ever meet. We’ve rounded up a list of the top ten places to visit in Cambodia, which can also be easily combined with a trip to neighboring Laos or Vietnam.

Ready to travel? Take a tour with Maupintour.

Angkor is one of the most significant archaeological sites in Southeast Asia. Ruins of a thousand temples can be found scattered over farmlands and rice fields. These include the famous Angkor Wat temple, the world’s largest single religious monument, the Bayon temple at Angkor Thom, with its multitude of massive stone faces, and Ta Prohm, a Buddhist temple ruin entwined with towering trees. Many of the temples at Angkor have been restored, making the huge palace one of the wonders of the ancient world while offering an outstanding look of Khmer history.

Siem Reap is more than just the gateway for the temples of Angkor. This ancient city has reinvented itself as the epicenter of chic Cambodia, with everything from backpacker party pads, hip hotels, world-class dining, lovely spas, great shopping, and a creative culture scene.

The capital of Cambodia is a captivating city of great charm and vitality, crisscrossed by broad tree-lined boulevards and dotted with old colonial villas. Once known as “The Pearl of Asia,” Phnom Penh is considered one of the prettiest cities the French built in Indochina, though the city is still recovering from war and revolution. Top attractions include the Royal Palace and the National Museum, which contains a large collection of Khmer artifacts.

Sihanoukville is the most popular Cambodian beach resort on the Gulf of Thailand. This southern Cambodia city offers both sandy and rocky beaches. Though none of Sihanoukville’s beaches would qualify as southeast Asia’s finest, it is one of the best places to unwind in Cambodia after visiting all the Khmer and other attractions in the rest of the country. The beaches feature both backpacker huts and luxury five-star hotels. Snorkeling is popular on some of the offshore islands.

Song Saa is a romantic beach escape that oozes tranquillity. In the warm sapphire waters of the Gulf of Thailand, this private island is a tropical secluded haven, a deserted oasis of virgin rainforests, tropical reefs and glistening beaches.

The diverse region of Ratanakiri has outstanding natural beauty and is home to several ethnic minority villages. For those with an adventurous streak, the province is home to some of Cambodia’s best activities: swim in clean volcanic lakes, shower under waterfalls and trek in the vast Virachey National Park.

Battambang is Cambodia’s second most populous city and is especially popular with visitors interested in Cambodian history. The town features many Angkor-style temples and Buddhist shrines. Statues, mostly of animals and gods, can be found in most public places. The countryside is home to rice fields and tiny villages and holds some of the most tranquil rural scenery in Cambodia.

Just off Cambodia’s south coast lie a scattering of islands just as beautiful as their Thai counterparts to the west, but much less visited. Of all the islands, Koh Rong Samloem is one of the most beautiful, with Saracen Bay Beach home to a dozen beach hut resorts that offer a welcome respite from the world.

Located on a river not too far from the Gulf of Thailand, Kampot is the gateway to Bokor National Park, famed for its abandoned French hill station, pleasant climate and lush primary rainforest. Kampot also offers visitors the opportunity to go boating and rafting on the river that winds through town, as well as take in scenic waterfalls along the route. The Kampot Kompong Trach caves offer visitors the chance to see ancient ruins.

Kratie is a small town located on the banks of the Mekong River and is dominated by a central marketplace surrounded by old French colonial buildings. There’s no large scale tourism, but plenty of backpackers pour through here during the peak season. It is the place in Cambodia to see the rare Irrawaddy dolphins, which live in the Mekong River in ever-diminishing numbers.

Ready to travel to Asia? Check out Maupintour for all your travel needs.